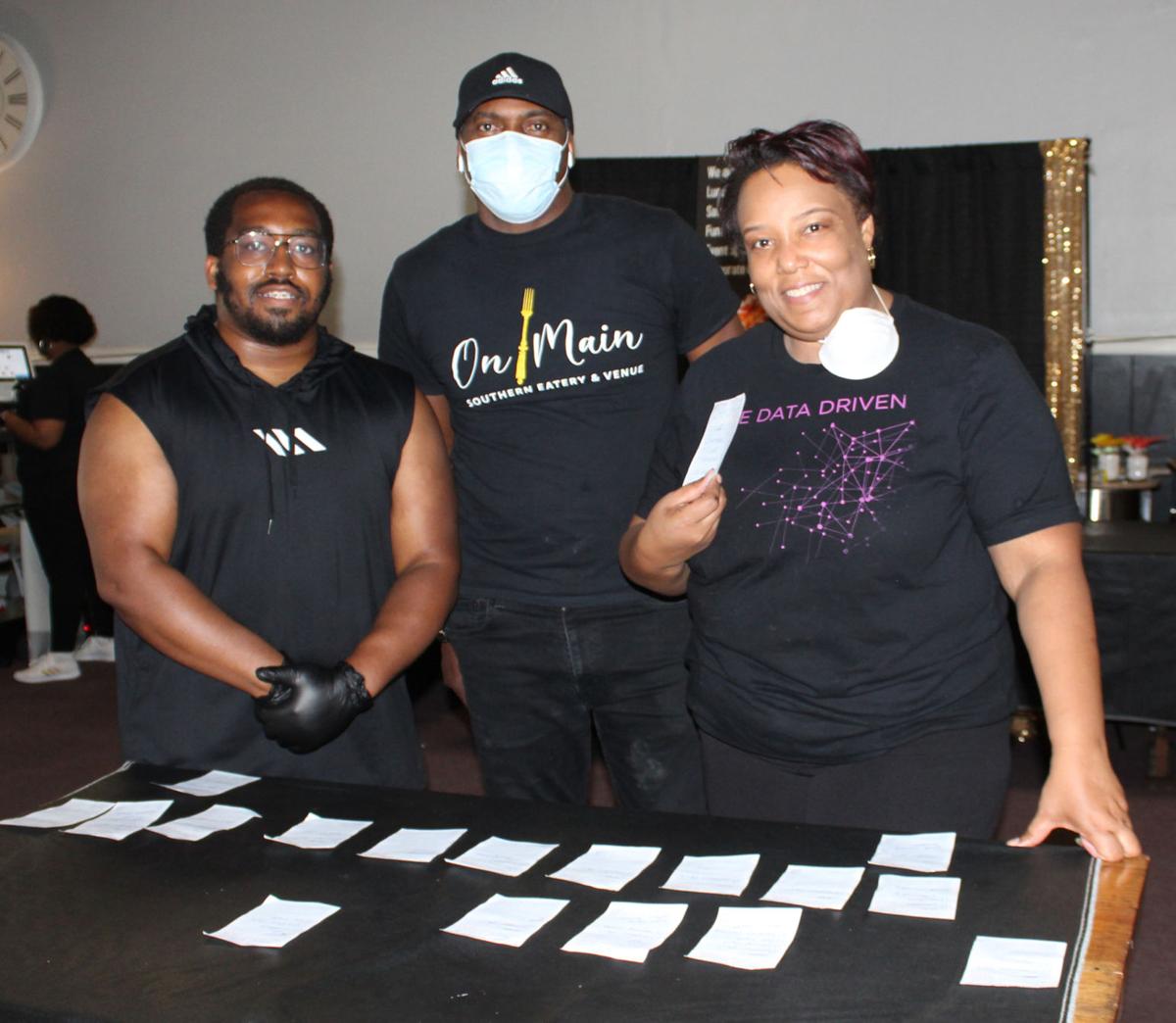 Business partners, from the left, Eric McNeil, Ron Judkins and Emily McCormick get pre-orders together Friday evening at On Main Southern Eatery & Venue in Warrenton. The special was a Cajun low country boil, back by popular demand for the second consecutive week. 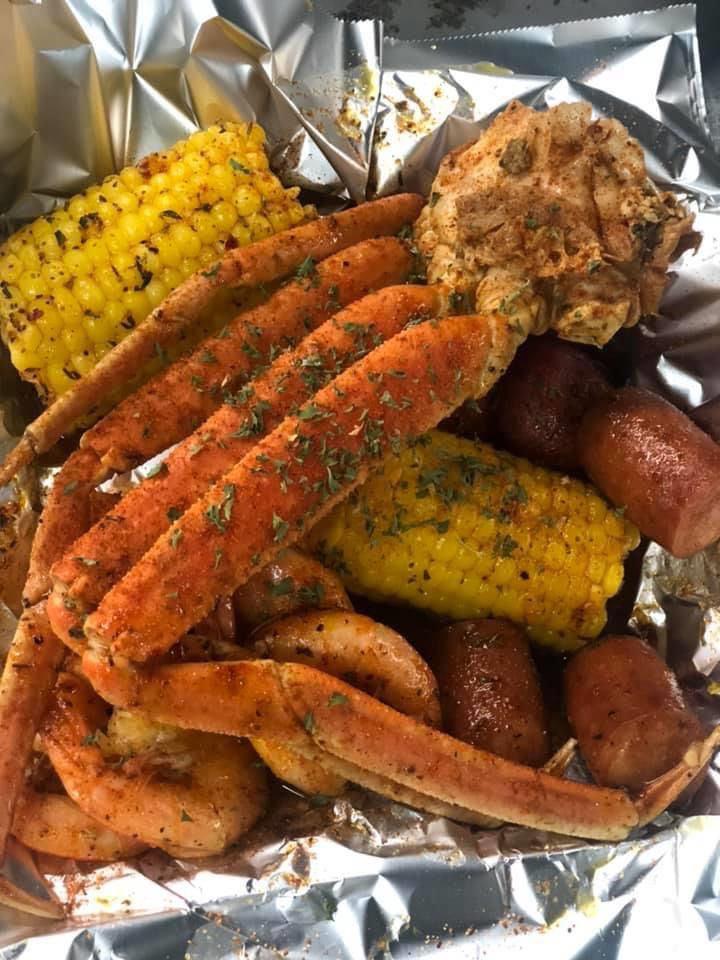 On Main’s Cajun Low Country Boil is a customer favorite.

Some local small businesses, while either keeping their proverbial heads above water or adapting to COVID-19 in stride, have enjoyed the benefit of being established in the community with loyal clientele willing to accept new methods of service.

Others, like downtown Warrenton’s On Main Southern Eatery and Venue, which opened last October at the corner of Main and Franklin streets, have been forced to simultaneously alter their business practices while continuing to grow the company itself.

“We didn’t anticipate in our wildest dreams we were going to run into something like (COVID-19)," said Warrenton native Emily McCormick, a partner in On Main's ownership group that also includes her cousin Ron Judkins and Andre McNeil of Clayton.

On Main had built some traction in the fall, opening to some fanfare before business predictably slowed in the winter months. Then it was knocked flat by the coronavirus outbreak and subsequent government guidelines or restrictions on restaurant operations.

The timing just wasn't very kind to On Main, which had figured to rely heavily on its buffet offerings and space for social gatherings, but instead was forced to temporarily close on March 22, laying off 14 employees.

Judkins thought that might be the last chapter for a while, maybe even until The Warren Record's Readers' Choice winner for Best Fried Chicken and Customer Service could allow patrons inside to dine again.

But for the last few weeks, On Main has experienced a revival of sorts, opening to the public once a week on Fridays for takeout.

"The response has been incredible," Judkins said.

McCormick added, “We got a very good response from the community. So now we’re trying to figure out, how do we incorporate that going forward?”

McCormick and Judkins said the resurgence is owed to their partnership with local nonprofit Working Landscapes, which has been teaming with On Main to provide meals to those in need through Warren County Schools. Judkins also gave a nod to Warren County Economic Development Director Stacy Woodhouse for initiating the process that gave On Main the boost it needed.

"That was like, 'Oh my God,' the thing that we need to kind of jumpstart, and get started again,"  McCormick said.

Before that, McCormick had helped organize a GoFundMe effort that has raised nearly $2,000. On Main hadn't been in business long enough to secure some of the loans that could have kept the business going with normal hours, but finally did end up securing payroll protection through a local bank.

The positive reaction that followed what can be considered a gradual reopening for On Main has been evident through its active Facebook page that regularly posts photos of food that make it hard not to visit the accompanying link to the restaurant's website to preorder food.

When On Main posted on April 18 to advertise its fried fish and Southern fried chicken meal, Warrenton’s Steve Hyman commented, “Have mercy!! It was love at first sight today! Prettiest chicken I’ve seen in a long time. My eyes were watering with anticipation! When y’all gonna do it again?”

The answer for this Friday (11 a.m. to 6 p.m.) is a meal anchored by 60-cent chicken wings and a choice of sauce. Fried chicken and fish will also be available.

Customers can preorder online, call in or visit the restaurant to place a to-go order.

On Main now offers curbside service so visitors don't have to leave their cars to pick up their orders. The ownership trio wouldn't have imagined that when they first opened their doors, aiming to be not only a place to gather around a plentiful buffet, but a spot for weekly live music and events like birthday parties or weddings. On Main had multiple contracts on the books for spring and summer events when it closed.

McNeil and McCormick's husband, Gary, are both musicians and a key reason why the word "venue" is in the company name.

“From the very beginning, we had people saying, ‘Please don’t go anywhere,’” Emily said. “‘This is the kind of stuff we need in town.’ So we felt like we were giving opportunities to people that would maybe have to drive 45 minutes. That was a good feeling to be filling a gap in the community. Now we just want to continue filling that gap and be there in the community.”

Judkins, kitchen manager Ethel Fogg and Rockelle Bryant were the last to leave On Main Sunday evening for the Mother s Day special that included a giveaway of roses and rosé wine to the first 24 customers who preordered.

Judkins then headed to Hecks Grove with a to-go plate for his 74-year-old mother, Rena, whom he credits with instilling in him and his family the ultimate resilient attitude, something that has been vital the last couple of months.

On Main isn’t sure yet what the next phase of its reopening will look like, or the timeline. But at least they’re surviving, as single mom Rena taught Ron and his siblings.

“I would love to get to the point where everyone is coming in and sitting down and eating and enjoying live music on Friday nights,” Ron said. “My thing is I want to make sure it’s safe... I believe in safety before anything and all this other stuff will take care of itself.”