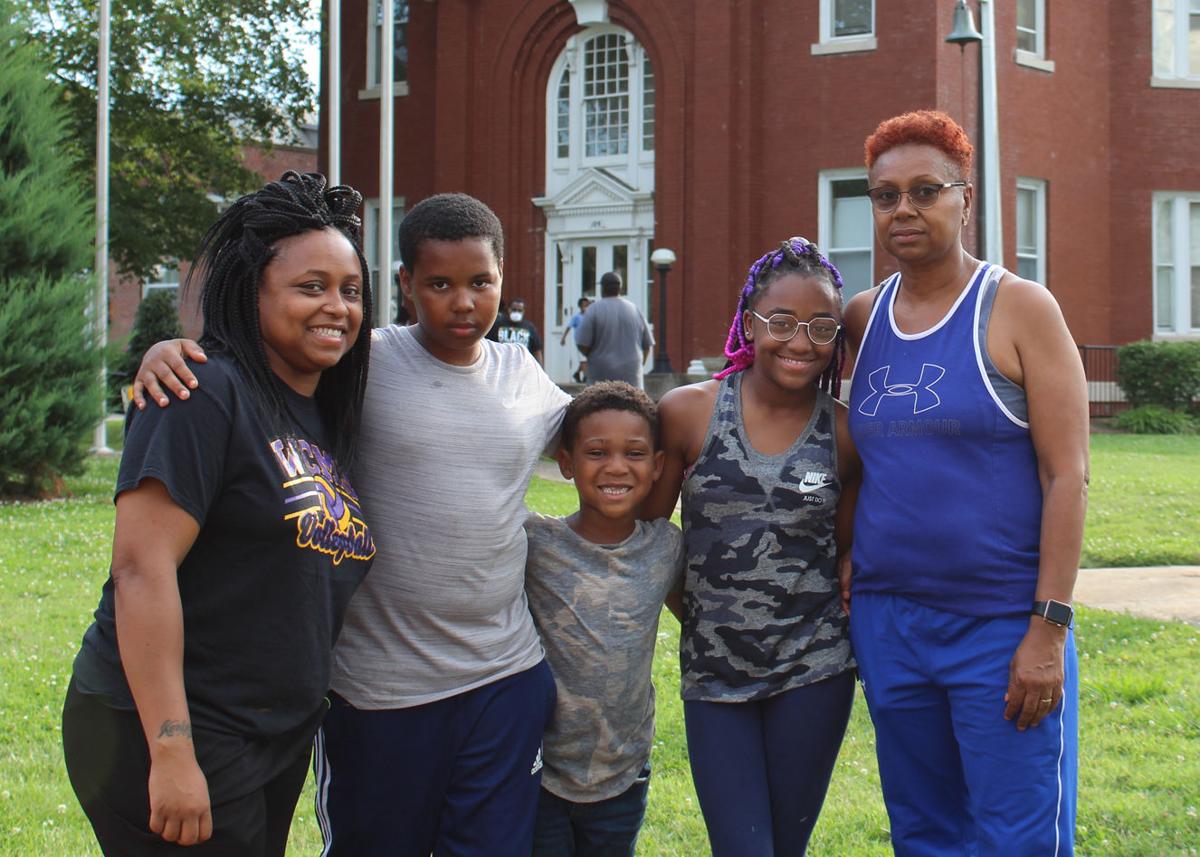 Simone Turner, Malachi Williams, Tyler Davis, Kenley Sheats and Shelia  Ragland Williams were among the many gathered on Courthouse Square. 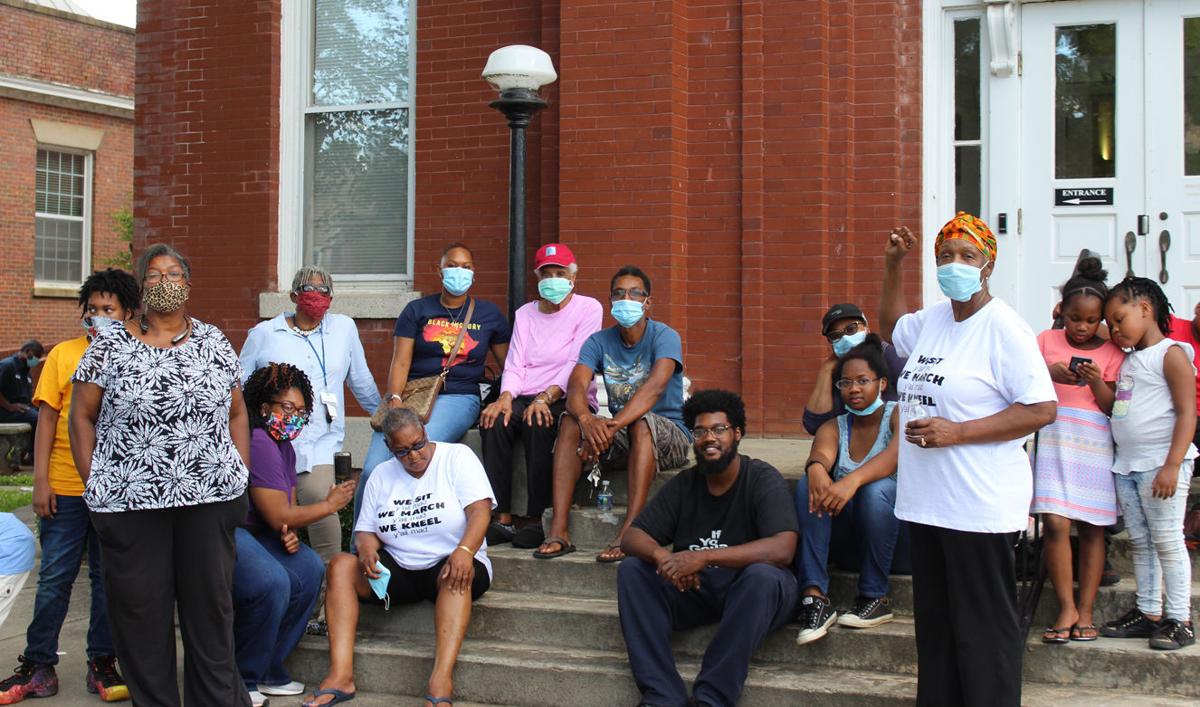 The Green family, ages 5-89, were the first to gather on Courthouse Square to witness the removal of the Confederate Monument on June 23.

Simone Turner, Malachi Williams, Tyler Davis, Kenley Sheats and Shelia  Ragland Williams were among the many gathered on Courthouse Square.

The Green family, ages 5-89, were the first to gather on Courthouse Square to witness the removal of the Confederate Monument on June 23.

Before the Warren County Board of Commissioners considered taking action to remove the Confederate monument on Warrenton’s Courthouse Square on June 23, Board Chairman Tare “T” Davis announced that he would allow members of the public to make comments of two minutes each.

At the same time, what would become more than 100 people had begun to gather on Courthouse Square to witness the removal of the monument that had been in place since 1913.

Public comments typically are not permitted during emergency meetings; however, Davis said that he would make an exception due to the circumstances. Several of the citizens who chose to speak urged commissioners to base their decision on maintaining the safety of local residents to prevent the type of dangerous situations that arose when people tore down Confederate monuments in other areas of the state.

“I would hate mighty bad for a repeat of what happened in Raleigh to happen here,” said Bob Pridgen.

He asked that the monument be moved from public to private property so that those who wanted to study local history could have access to it, while others would not have to see it.

William Darnell, who said that his ancestors fought in the Civil War, said that the monument was just that, “a monument to a lost cause” and to the men who died in the war.

He urged the people of Warren County to move forward from this point as a united citizenry.

“I wish that everyone in the county could come together for a common cause,” Darnell said.

Mike Williams, who described himself as a native son of Warren County, asked commissioners to carefully consider the matter at hand.

“The eyes of the world are watching us,” he said. “History is watching us. Your decision will reverberate for generations to come.”

Williams called for the county to relocate the monument and move forward with a pluralistic history in mind in which all people’s voices can be heard.

Kim Burrows said that she chose to live in Warren County because she found it to be “the nicest, sweetest county” where a sense of community is important. She urged the people of the community to come together as one to set an example for other areas.

On the steps of the courthouse, more than a dozen members of the Green family, ages 5 to 89 came to bear witness.

“We’re here because (the monument) shouldn’t be,” said Betty Green. “It’s been here for too long and the time is at hand. It’s time to stop celebrating people and history like this. It’s time to celebrate those who promote peace.” She said she had hoped to see a more diverse gathering of the community, but will keep hope alive.

Members of the Williams family were also among the many who gathered. “This is supposed to be a place where you go to get justice,” said Sheila Williams, who’s lived in Warrenton her whole life.

She felt the monument was a symbol of slavery and oppression. “Now that it’s coming down, we don’t have to be afraid. I feel like it’s a weight off our shoulders. We just want everyone to be together in peace. More of us need to sit down and try to understand each other.”

During the commissioners’ discussion, several board members said that they had received phone calls from people in the community since the emergency meeting was called earlier that day.

Commissioner Jennifer Pierce questioned whether state statutes permitted the county to move the monument. However, she said that the larger issues circling around the local Confederate monument did not start when the monument was erected.

Pierce asked that if the board decided to move the monument, it should be moved at once. She also noted that a citizen asked her if the decision about moving the monument could be placed on the November General Election ballot for the citizens to decide. Pierce asked other commissioners not to act in haste, but to fully explain their decision to the public.

Victor Hunt, vice chairman of the board, said that the safety of Warren County residents and businesses was his primary concern. He asked the board to think about maintaining unity and peace in the community.

“What happened in Raleigh is a great concern, with outsiders coming in,” Hunt said. “I want the citizens and the board to make the decision for Warren County, not an outside group.”

Commissioner Bertadean Baker said that she wanted the board to consider input from the public about how to remove the Confederate monument and what to do with it instead of making a rushed decision.

“Give things time to calm down,” she said. “Make sure we have time to make the right decision. I would like to see Warren County stay peaceful.”

Commissioner Walter Powell said that he wanted local citizens to be able to provide input about what to do with the monument and for the board to carefully consider its decision; however, he added that board must also take local safety into consideration.

“I would never like to see someone come into the county and destroy (things),” he said.

Chairman Davis added that however one might feel about the monument, “Our main concern was public safety. We don’t have the resources of bigger cities to control rioters.”

Davis said plans are in the works to have the rest of the monument removed within the next few weeks. And leaning toward a military theme, a committee will also be formed to determine what will go in its place.