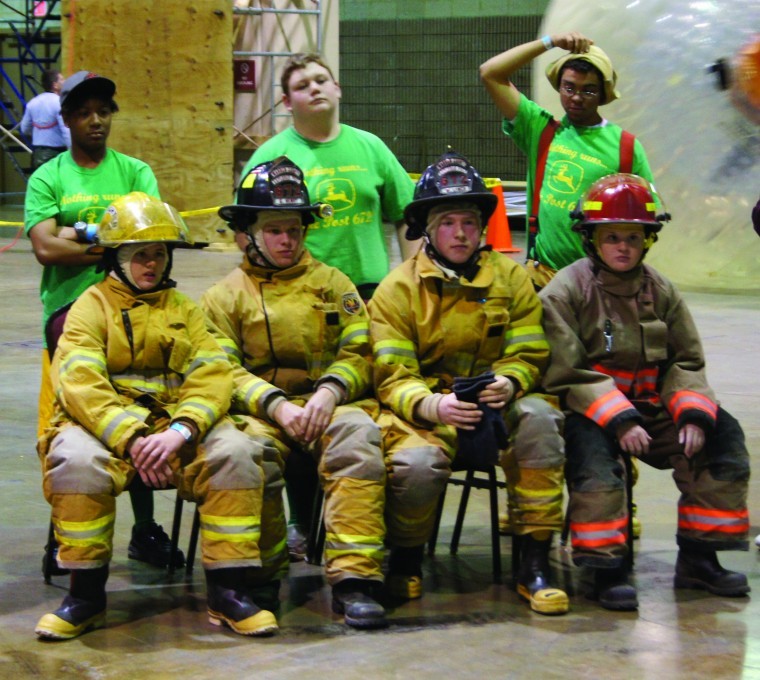 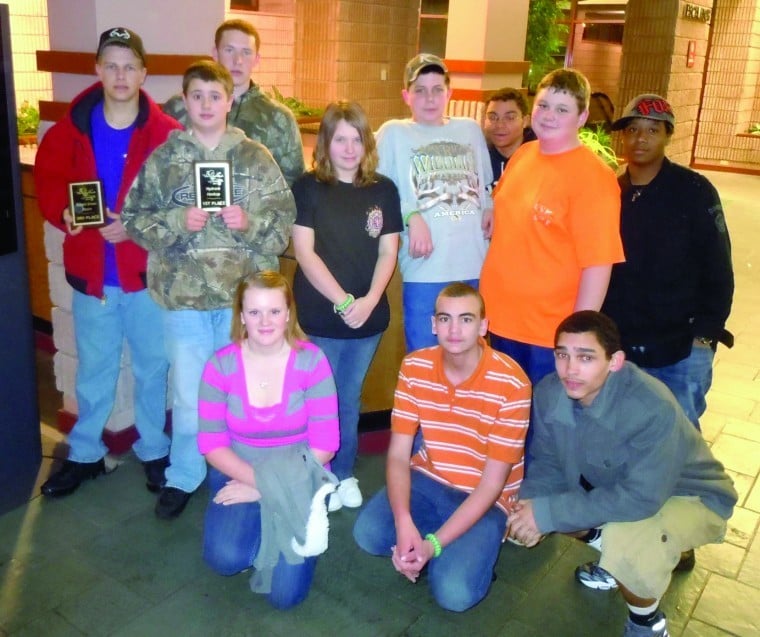 They may not look as excited as they feel on the inside after competing all day Saturday then celebrating into the night, but tired members of Warren County Fire Explorer Post 672 couldn't be more proud after winning two awards in a national Explorer event. Pictured from left to right are, kneeling: Ariel Holtzmann, Buddy Lynch and Michael Leonard; standing: Greg Henry, Hunter Powell, Will Lynch, McKayla Burgess, Trevor Tucker, Seth Alston, Luke Choplin and Jazzai Gill. Photo: John Franks, Special to The Warren Record

They may not look as excited as they feel on the inside after competing all day Saturday then celebrating into the night, but tired members of Warren County Fire Explorer Post 672 couldn't be more proud after winning two awards in a national Explorer event. Pictured from left to right are, kneeling: Ariel Holtzmann, Buddy Lynch and Michael Leonard; standing: Greg Henry, Hunter Powell, Will Lynch, McKayla Burgess, Trevor Tucker, Seth Alston, Luke Choplin and Jazzai Gill. Photo: John Franks, Special to The Warren Record

Members and advisors in Fire Explorer Post 672 got a hero's welcome when they returned home last weekend after competing for the first time at a national event. The junior firefighters from Warren County weren't empty-handed: they brought back awards for first- and third-place finishes.

"They well far exceeded my expectations of how they would do the first year," said Chris Pegram, Post advisor.

An estimated 3,800 young people from Explorer Posts and Venture Crews from over 20 states attended this year's Winterfest, the largest Exploring/Venturing event in the nation. Explorer posts from North Carolina took four awards for first place, three for second place, and four for third place.

"I think that is awesome for this state's young professionals," Pegram said.

The Warren County contingent left here at 5 a.m. Friday headed to Gatlinburg, Tenn., home to Winterfest. Having won a slew of events in local and state competitions in the past couple of years, the Explorers know the importance of training and held a number of practice sessions at nights and on weekends in order to prepare. But they were only able to practice for three of their events because they didn't have all the props needed to simulate competition set-up.

On Saturday, the juniors competed in seven timed events designed to test teamwork and skills used in the fire service. Pegram said he registered the teams to perform the harder events first, which made certain competitions more difficult.

"Once their gear got sweaty, it was harder to get around, and they were more tired," he said. "A few kind of hung their heads because of their performance in some of the events. Doing the easier events first would have kept them motivated and their spirits up."

Despite the learning curve, Warren County took first place in the Hydrant Hook-up event, and had a third-place finish out of 43 teams with an unofficial time of 38.75 seconds in the Team Rapid Dress event, in which firefighters have to correctly put on full protective clothing and air packs.

"I want to thank the Explorers for their hard work training. That hard work paid off for a great showing," Pegram said.

In addition to competitive events, the weekend provided a chance for networking during a round table wrap-up for advisors Saturday evening.

"A lot of great ideas were born thanks to that invaluable communication," Pegram said.

When the group arrived home Sunday afternoon, they had a police escort into Warrenton and were greeted by family, firefighters and other Explorers from across the county, who had gathered in front of the Warrenton Rural fire station on South Main Street. Fire trucks with lights and sirens going were parked on both sides of the street, and supporters cheered, held up congratulatory signs and waved American flags.

"The Explorers couldn't even sit in the van," said Pegram, who was driving and finally stopped so the juniors could get out. "The doors opened, and they all ran down Main Street into the crowd of loved ones and friends. The emotions and excitement could not have been matched by any other event or venue. It was truly incredible and was without a doubt the highlight of the trip for everyone involved."

Pegram acknowledged the Warrenton Police Department for the escort and those who contributed to the trip's success.

"A very big thank you to the fire departments and individuals that made this trip possible financially. Our post is not as fortunate as some when it comes to budgets," Pegram said. "My biggest thank you goes to my wife, Amanda, (for organizing the homecoming celebration)."

Advisors in Fire Explorer Post 672 are already planning fundraisers so they can return to Winterfest next year, as well as preparing to host their second annual competition here in May. They are also recruiting new members, and several young people joined the post Monday night.

See additional photos from this weekend under More Coverage below.