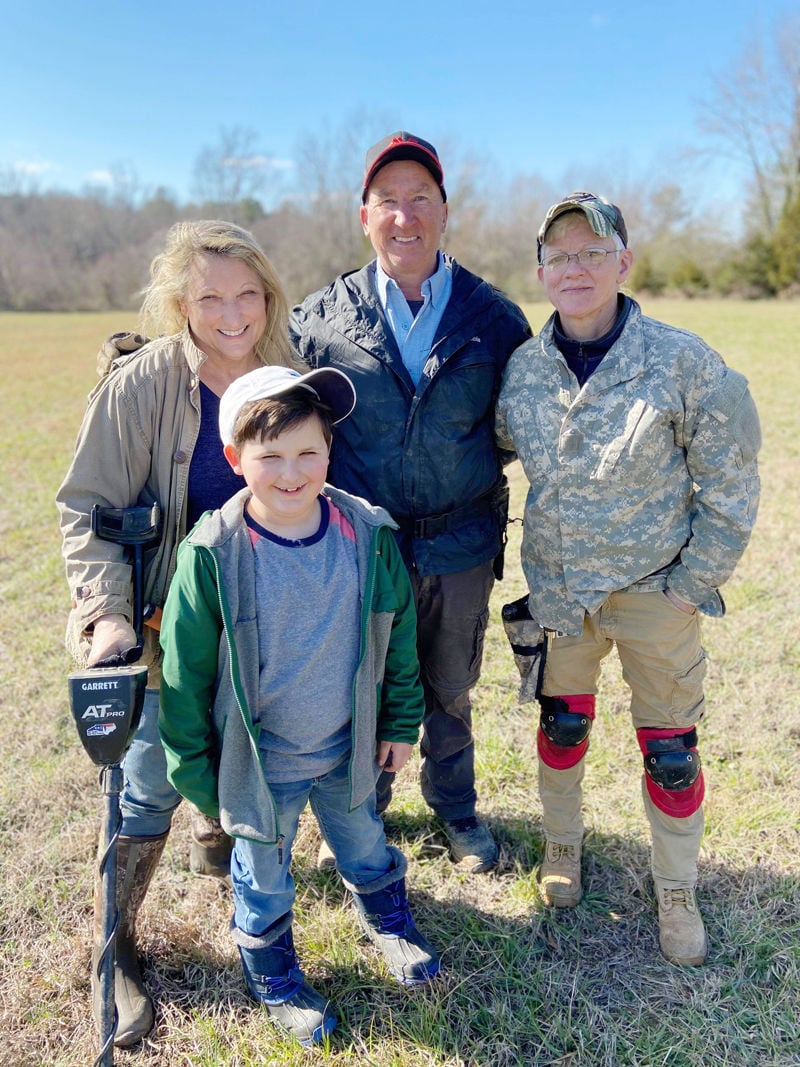 Gary Drayton from the History Channel’s “The Curse of Oak Island” recently enjoyed two days of metal detecting in Warren County, joining a group of metal detectorists from across North Carolina on a relic hunt organized by Junell Nixon of Warrenton. Originally from England, Drayton lives in Florida and is on break from filming the popular television show, where he works with brothers Rick and Marty Lagina to solve the mystery of buried treasure on Oak Island in Nova Scotia. Pictured from left to right are Nixon, her grandson Parker Leach, Drayton and team member Victoria Rhine. 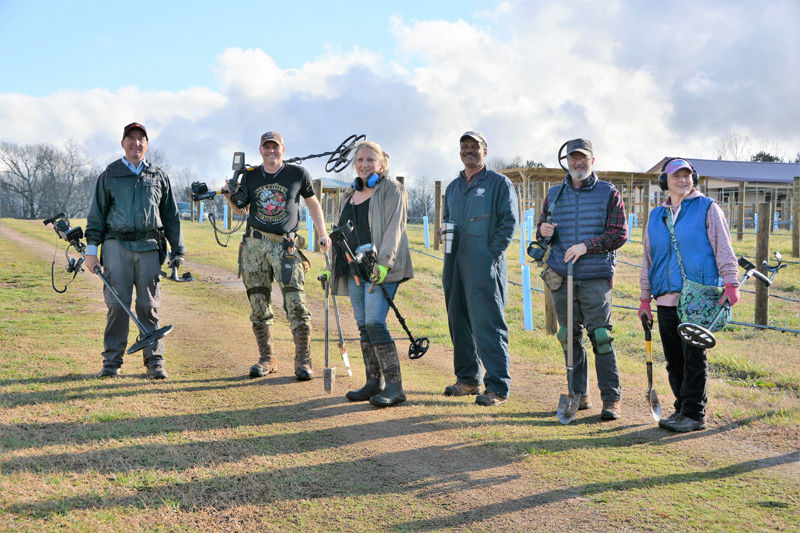 Members of the relic hunt from left to right are: Gary Drayton from “The Curse of Oak Island,” Shawn Sgt. Whitey, Junell Nixon of Warrenton, hunt sponsor Preston Williams of Warren County, and Vic and Julie Weston. Other hunt sponsors were Don Arnold and Ernie Fleming, and Michael Kilian.

Warrenton resident Junell Nixon has been digging up relics ever since she started swinging a metal detector some five years ago. Sometimes she hits on nails or recent coins other detectors wouldn’t bother with. Once, she unearthed a valuable 1820s belt buckle that she returned to the property owner, because that’s the right thing to do and her personal philosophy.

The show, which airs on Tuesdays at 9 p.m., follows the efforts of a team led by brothers Rick and Marty Lagina of Michigan to find buried treasure and historical clues on a small island off the coast of Nova Scotia.

Nixon was emailing with a fellow metal detector one night who is a friend of Drayton’s and passed along a message to tell him hello.

Nixon’s friend said she would mention it to him, and two to three days later, Nixon got this reply: “He’s in.”

“I freaked out on my message board, I was so excited,” she said.

Nixon’s friends on the hunt, especially Archie Babcock, whom she has known for several years, gave her a good-natured warning: I hope you’re going to be cool, she said he told her.

Drayton arrived in Warren County from his home in Florida on a Friday, metal detected on Saturday and Sunday, and found some unique pieces, Nixon said. The experience was a learning experience for him, she said, as he is used to detecting at the beach, not in wooded areas.

“He’d never done a Civil War site,” Nixon said. “I was so fascinated with him and watching him. I didn’t find anything exciting that weekend.”

Over dinner at a local restaurant Saturday night, Nixon said the group heard some stories about Drayton’s time on Oak Island, which has finished filming for the season. They even tried to learn some inside information on upcoming unaired episodes, but she said Drayton was vague and didn’t reveal anything new.

“He was gracious, so friendly and humble,” Nixon said.

Metal detecting groups each have their personalities, and having a celebrity metal detecting expert on their dig calmed her group down more than usual, Nixon said of their weekend.

For her, digging up relics, whether they are new or old, is a matter of history talking.

“I dig anything to me that tells a story,” she said. “That’s what I like about ‘The Curse of Oak Island.’ They’ve dug a cross, they’ve done coins, they’ve done buttons, and they’re trying to piece together what happened on this island several hundred years ago where you can make a story out of it by digging these things.”

Nixon said nothing excites her more than chains, iron, locks, axes or even hatchets.

“If you discriminate that out, you miss what I think of everything being history. You never know when you’re going to hit something big,” she said. “I’m good digging a plow point …  and I dig some nice stuff, too. Once I turn that machine on, I am so happy. It’s an amazing hobby.

“I really appreciate everyone who has allowed me to detect. It’s so much fun, and they’re so gracious.”

Anyone interested in finding out about relics on their property is invited to contact Junell Nixon by emailing her at junellnixon51@gmail.com. There is no fee for her to indulge her hobby, and she returns her finds to the property owner.

I think of everything being history. You never know when you're going to hit something big.