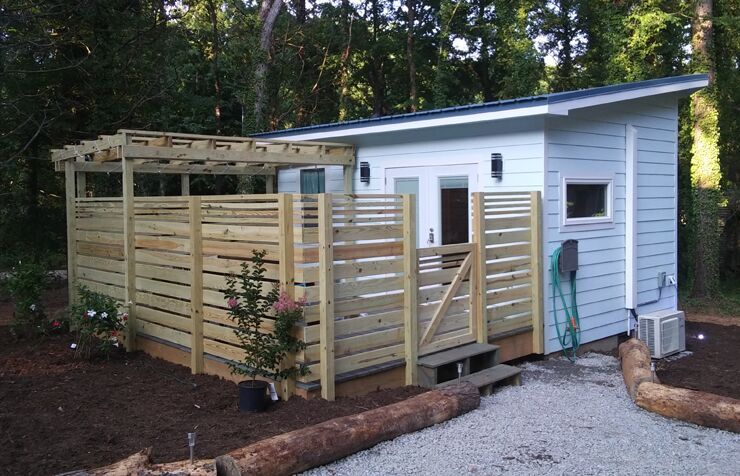 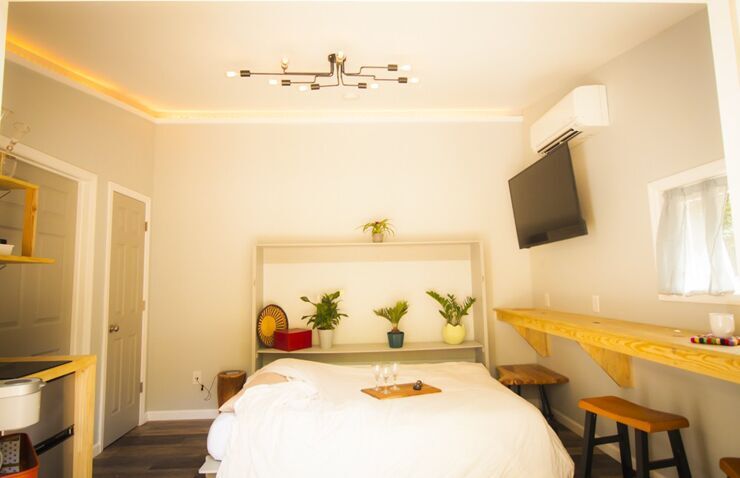 When talking with Raleigh-based developer Michael Bernstein — the owner of the first tiny house built on Church Street in Warrenton that opened as an Airbandb on July 16 — it’s easy to think he’s from here.

But while he is not, at least not yet, Bernstein does spend three or four days a week in town and has plans to move up permanently in the next two or three years.

Sounding like a chamber of commerce director, he speaks with passion and purpose about the people he’s met and the potential for the town.

“I love Warrenton,” said Bernstein, 42, a former San Francisco Bay Area resident who moved to Raleigh three years ago for a change in quality of life. “It was the best decision I’ve ever made.”

Of Warrenton, he says he was initially and continues to be impressed by the architecture, the people, and businesses such as Robinson Ferry, Drip and Hardware Café. “There’s a lot going on and lots of opportunity here,” he said.

At a cost of around $20,000, Bernstein bought a 1.8-acre parcel of land at the end of Church Street from Hillman Poythress in December of 2018. He also paid up front for gas, electric, water, sewer and Internet to be brought in, which took 18 months to complete.

“The town helped facilitate some of the infrastructure installation and was very helpful in making it happen,” Bernstein said. “Warrenton is pro-business.”

With just the one house now built, this land will eventually be divided into six more 6,000- to 8,000-square-foot lots on which houses up to 750 square feet will be built. The house Bernstein owns is 216 square feet with an adjoining equally sized pet-friendly porch that rents for $100-$150 a night, depending on the days. It’s been booked solid since July 16 to the tune of $3,300 in rental income, and numerous positive reviews on airbandb.com as well.

“People are coming to visit and spending money in town,” he said.

Depending on what a particular market might bear, Bernstein believes this could be a scalable business model in small towns across the state and beyond that could help revitalize tourism and contribute to local economies.

Jimmy Harris, owner of Harris Equipment Company, is the general contractor, and Jim Sondgeroth, owner of Quality Crafters in Warrenton, is the builder.

After paying the 20 percent deposit, the houses take approximately four months to complete. Ranging in price from $150,000 to $200,000, owners can choose from different models and sizes and the price depends on configuration.

Buyers can choose to live permanently in the house themselves or purchase one as a rental property, as Bernstein did.

“It sounds expensive, but with a monthly positive cash flow it makes sense,” he said. “It’s a fantastic location. You feel like you’re in the country, but it’s just a short walk to Walgreen’s and downtown.”

According to Town Administrator Robert Davie, the town has been working with Bernstein to guide the project through the town’s development ordinances and Special Use Permit process.

“We are very excited to have such an innovative, cutting edge development going on in Warrenton,” Davie said. “Along with the Frontier Warren project, this tiny house project demonstrates that Warrenton is a very progressive small town.  We are not standing still but moving forward, taking advantage of unique opportunities that will grow the town while maintaining its charm.”

After first considering building a place in Wilmington, Bernstein researched areas close to water and closer to Raleigh. Finding Kerr Lake and Lake Gaston, in October of 2018 on his way to Gaston, he stopped in Warrenton and met Davie walking down the street.

“He spoke highly of the area and talked about all the things in the pipeline,” Bernstein said. “He knew there was a dearth of accommodations in town and was supportive of my idea from day one. He helped me secure the land, facilitated everything and the whole process went very smoothly. I could not have done this without him.”

So far, Bernstein said half of those renting his house are driving through on their way to other parts of the country, and the other half are from in state and coming up to check out the area.

“People are discovering what Warrenton has to offer,” he said. “With telecommuting now more prevalent, buyers want property value and this is the place to be.”

Bernstein said he’s been in town day and night and found it to be very safe and very clean. As for other concerns people might have, the developer is positive and optimistic about the future.

“There may be a few potholes and some other work needed (on Church Street). It’s a process. But it’s a charming town that attracts really nice people from all walks of life. I’m trying to help that continue.”