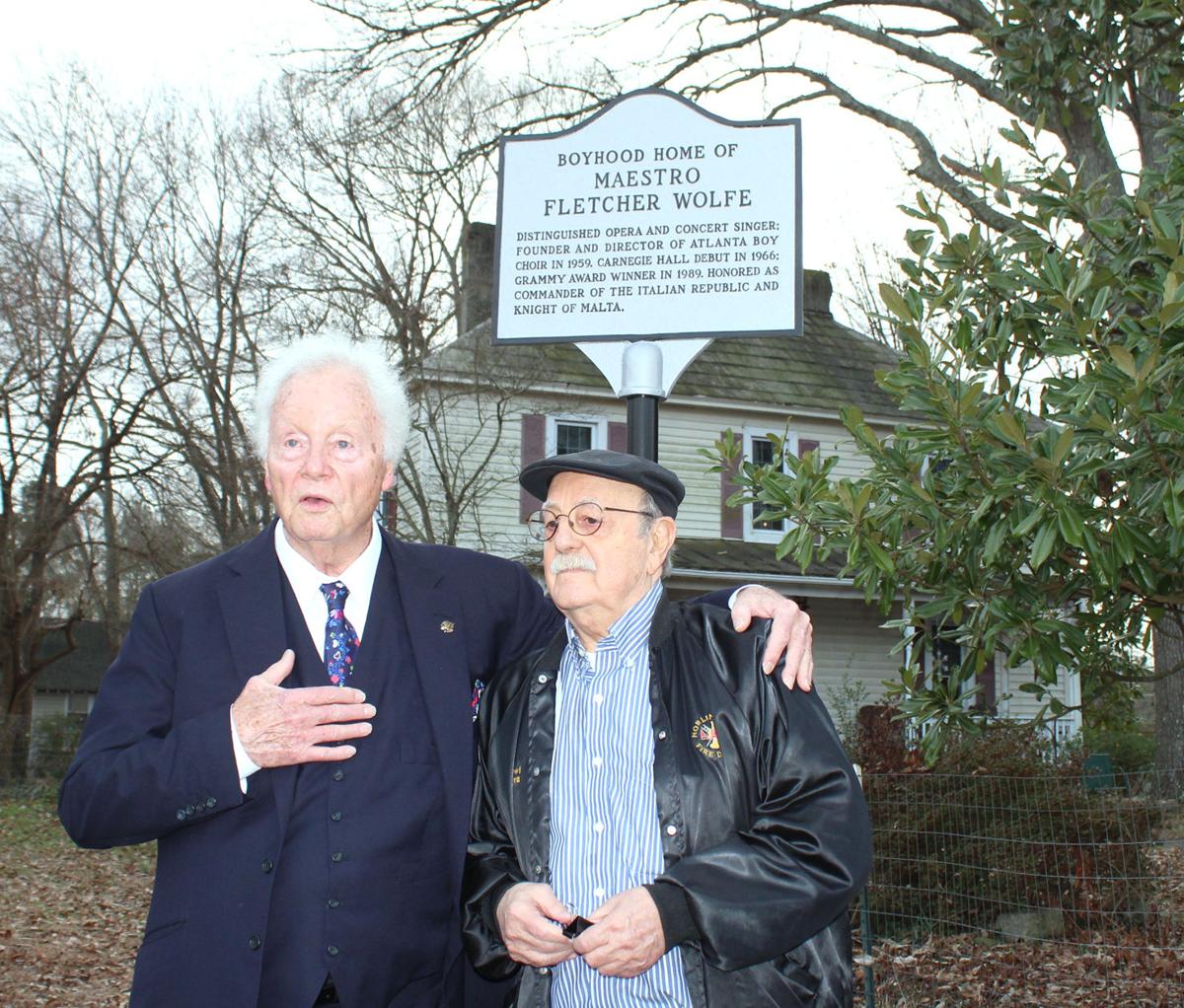 Fletcher Wolfe, left, expresses appreciation to Dwight Pearce, former mayor of Norlina, as the historical marker denoting his boyhood is dedicated on Saturday. The house where Wolfe grew up is pictured in the background. 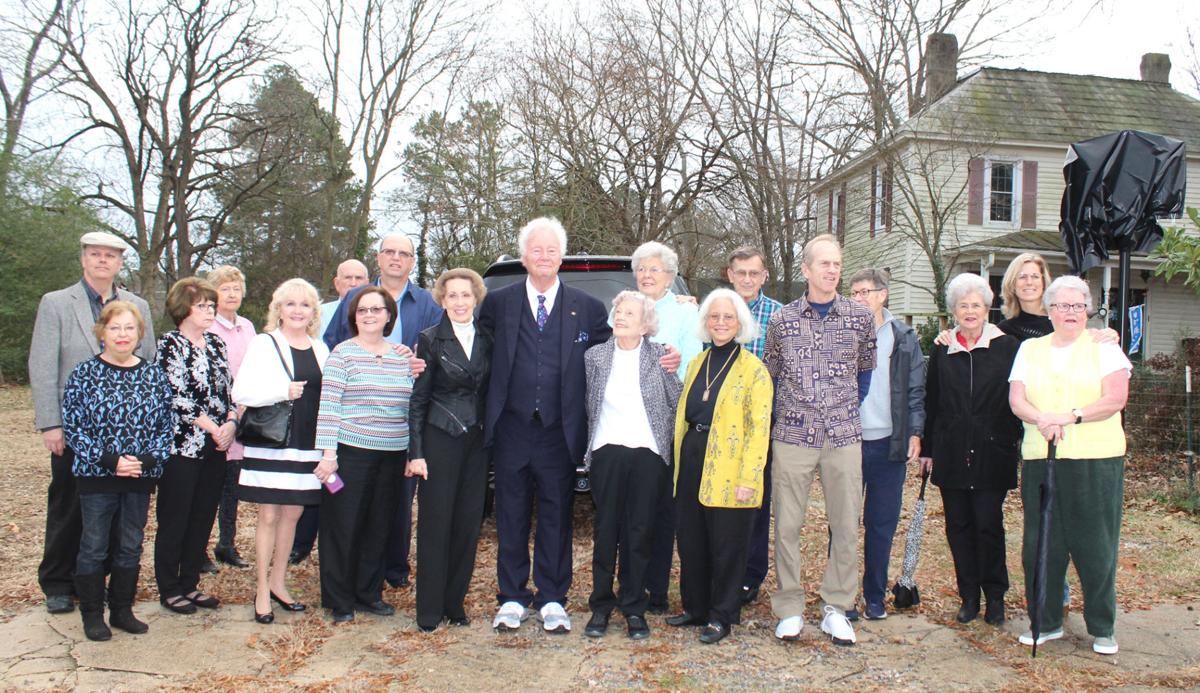 Fletcher Wolfe, center, enjoys spending time with family and longtime friends — many of them Norlinians — during Saturday’s historical marker dedication made in his honor. He is pictured with his hands around the shoulders of Irene Weldon, left, and Lou Traylor, right.

Opera and concert singer, and founder/director of the Atlanta Boy Choir Fletcher Wolfe returned to his native Norlina last weekend for the Saturday dedication of a historic marker designating his boyhood home on Liberty Street.

Current and former town officials joined citizens for a brief ceremony, honoring the man whose love of music allowed him to travel to sites across the world before retiring from the Atlanta Boy Choir three years ago.

However, Wolfe deflected the attention from himself, instead cherishing the opportunity to catch up with longtime friends. The words, “I remember” were heard often as he greeted people as they arrived.

Dwight Pearce, former Norlina mayor, had to call for everyone’s attention to take a few moments for a marker unveiling ceremony. He expressed appreciation to previous town board members and to town Public Works Director Blaine Reese for making the marker possible.

Pearce credited Wolfe’s longtime friend and fellow Norlina native Irene Weldon, retired soprano and music professor, for sparking the idea for the historical marker. Pearce said that Weldon, a resident of near Norlina, spoke with him at Roost Crossroads Antiques & Art, which he manages.

“She stopped by the Roost and said, ‘We need to do something,’” Pearce said.

He agreed, tasking Reese with researching the criteria for requesting a state historical marker. However, when Reese learned that a state marker honoree must be dead for many years, the town of Norlina stepped in to design and install a marker of its own.

“Boyhood home of Maestro Fletcher Wolfe distinguished opera and concert singer; founder and director of Atlanta Boy Choir in 1959. Carnegie Hall debut in 1966; Grammy Award winner in 1989. Honored as Commander of the Italian Republic and Knight of Malta.”

Wolfe accepted his honor humbly, giving thanks to God for enabling him to be successful and to be able to travel around the world through his career in music.

“It’s quite an honor,” he said. “I really don’t deserve it. I appreciate it. The reason I was able to do all of these things is that it was the Lord’s work.”

The theme of worldwide travel is reflected in Wolfe’s memoir, “Around the World in 85 Years — A Boy from Norlina” by Candace Keach.

The memoir notes that Wolfe and his family moved to Norlina when he was about 12 years old. His father, Thomas Wolfe, first cousin of the author with the same name, wanted his three sons to become classical musicians. Fletcher took violin lessons, later moving to piano.

After graduating from Norlina High School, he received a bachelor’s degree in piano at Mitchell College in Statesville. At Mitchell, Fletcher was the lead in a number of the college’s opera performances and was student body president.

Fletcher’s musical career has allowed him to study and work with a number of notable musicians, included bass/baritone Hans Hotter, who guided Fletcher as he prepared for the role of Papageno in the Aspen Festival production of the first English translation of Mozart’s “The Magic Flute.”

When Fletcher and his wife, the former Roberta (Bobbe) Kahne, spent some time in San Diego, Calif., Fletcher worked with conductor Robert Shaw and his Robert Shaw Chorale. Shaw would later conduct the Atlanta Symphony Orchestra. His technique influenced Fletcher’s work with the Atlanta Boy Choir.

Fletcher also was influenced by music theorician Nadia Boulanger, studying music theory and composition under her direction in France. Boulanger conducted Fletcher in a number of performances there. Later, she invited the Atlanta Boy Choir to perform at the Great Palace of Fontainebleau.

Fletcher went on to appear in “Prince of Liederkrantz” on Broadway, as the king in Rodgers and Hammerstein’s “The King and I” and in an Atlanta Opera Arts production as the title role in Verdi’s “Otello.”

In 1955, Fletcher was invited to Athens, Ga., to direct music at Athens First Baptist Church. In Georgia, he organized the Athens Oratorio Society. He later moved to Atlanta, where he organized a group of boys to sing in an opera. It was this group of boys who became the famed Atlanta Boy Choir.

In Atlanta, Fletcher also founded an opera company with wife Bobbe designing and sewing costumes for productions. There, the Wolfes also worked with Metropolitan Opera tenor Ralph Errolle, with Fletcher as conducting assistant and Bobbe focusing on stage design.

In 1989, the Atlanta Boy Choir won a Grammy for its performance and recording of Britten’s “War Requiem” with Robert Shaw and the Atlanta Symphony Orchestra.

These travels have allowed Fletcher and the choir members to meet Coretta Scott King, Pope John Paul II, royalty and prime ministers from other countries.

However, on Saturday, Fletcher directed his praise to Norlina residents.

“I have never met anyone as nice as the people of Norlina,” he said.

Fletcher recalled growing up in Norlina, saying that he worked in a number of local businesses, such as the barber shop down the street from his boyhood home, the town’s movie theater and others.

He reminisced about his years in Norlina, pointing out people who gathered for the marker dedication among those he fondly remembered: Jimmy Overby, Lou Stultz, Linda Kidd, Esther Delbridge, Lou Traylor and Irene Weldon, among others.

“Money doesn’t mean anything,” he said. “Love and friendship are what is important.”

Before Fletcher resumed reminiscing with the longtime friends around him, he expressed appreciation to the town for choosing to honor him.