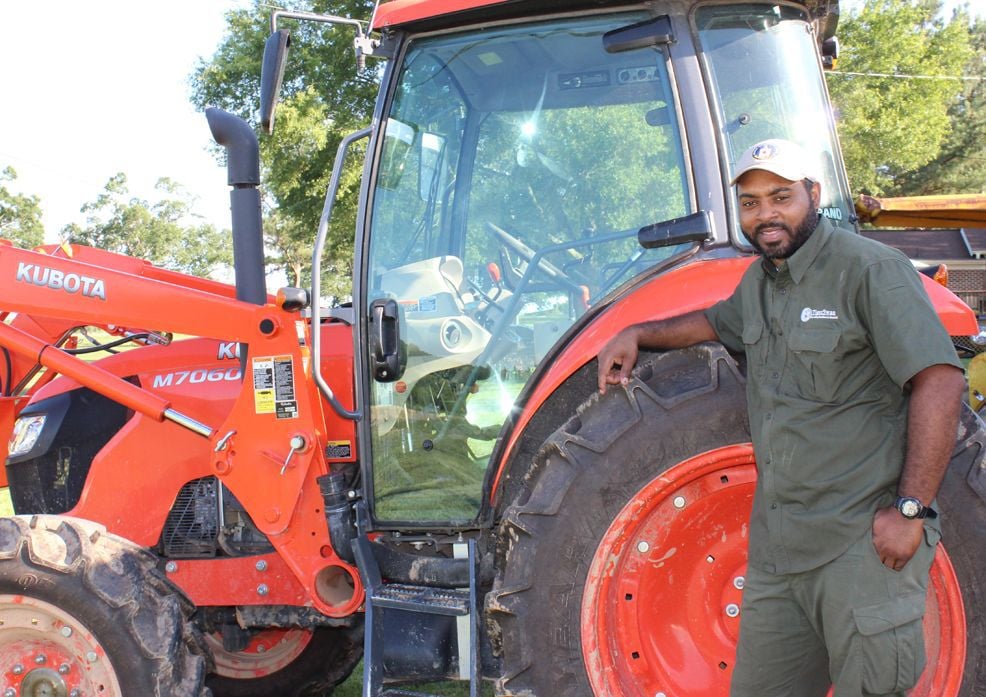 Patrick Brown with his new tractor on his farm in Hecks Grove. 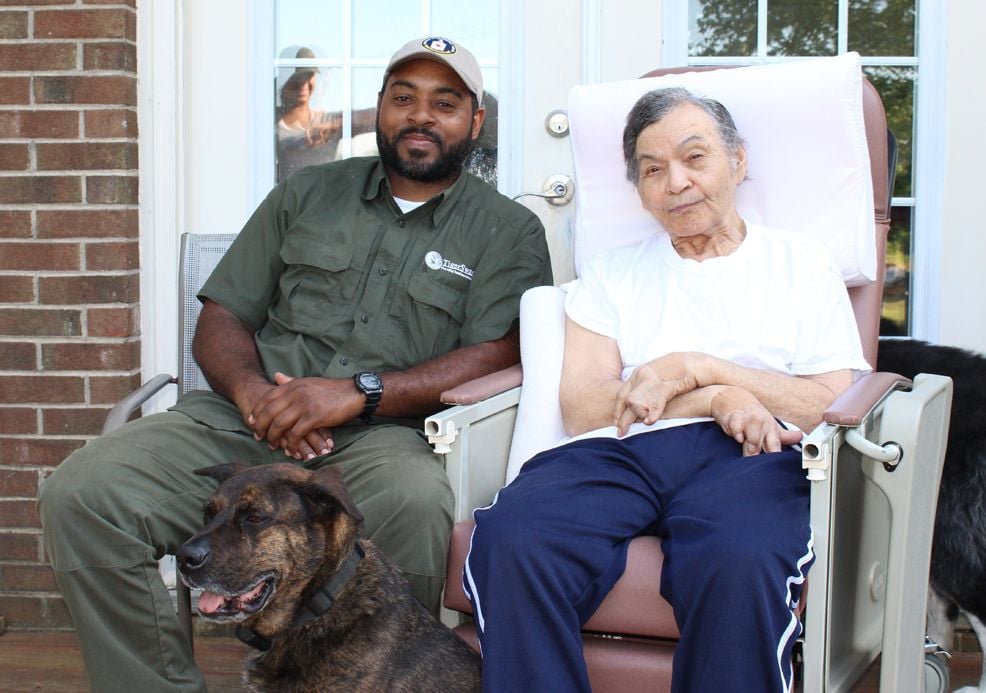 Patrick Brown with his father, Arthur, 93, on the back porch of the family home in Hecks Grove. 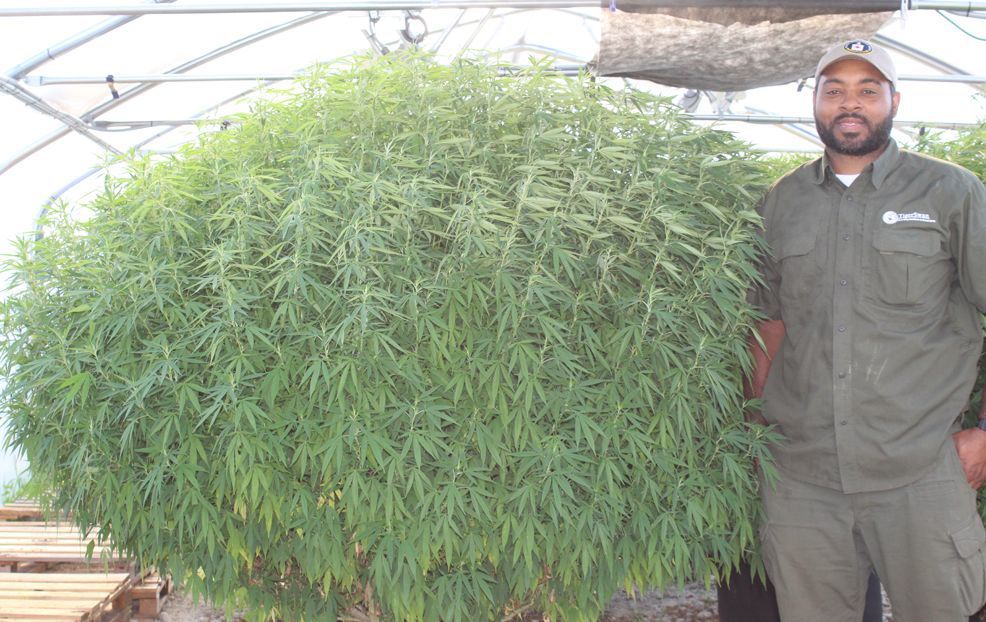 Patrick Brown with one of his "mother" hemp plants on his farm in Hecks Grove.

Patrick Brown with his new tractor on his farm in Hecks Grove.

Patrick Brown with his father, Arthur, 93, on the back porch of the family home in Hecks Grove.

Patrick Brown with one of his "mother" hemp plants on his farm in Hecks Grove.

In the township of Hecks Grove, Patrick Brown is farming land his family has owned since the late 1860s. During the intervening years, Brown men and women farmed tobacco, grain, soybeans, and now hemp, on what became 127 acres of cultivated land and 45 wooded.

Brown, 37, along with his sister Alison Brown-Floyd, are members of the fourth generation to grow up on this farm. Brown watched and learned and worked with his father, Arthur, 93, who also served as a minister at seven congregations across the region over 60 years. This experience inspired in him a lifelong connection to Brown Family Farms.

A 2001 graduate of Warren County High School, where he played baseball, football and basketball, Brown went on to major in business administration at Fayetteville State, where he also played football, graduating in 2005.

Starting in 2006, he served as a federal contractor and later as a federal employee, working alongside USDA and USAID staff in Afghanistan and traveling extensively in federal government service.

Brown’s wife Aleah Along with their son, Clayton, 6, the family lives part time in northern Virginia and part time in the Hecks Grove community.

Following passage of the 2014 farm bill legalizing industrial hemp, Brown did extensive research over two years before planting his first crop of germinated hemp seed over 18 acres in 2019. And in June he planted 7220 clones on six acres. The last tobacco crop was planted on the land in 2017.

When harvested, the hemp plants will be processed at a distillery in Boone to make products such as creams and oils for Brown’s vertically integrated company, Hempfinity, which launched in January (www.hempfinityus.com). These products made with CBD are known to naturally reduce pain and anxiety, treat symptoms related to PTSD and ADHD, and improve sleep.

“We understand more than just farming,” Brown said on July 2 from the back porch of the house where he grew up. “This is the only plant that can heal, clothe and feed our community. We want to become experts in how to do all three.”

Fiber and hurd, fruits and vegetables

In addition to products from hemp extract, Brown also wants to create fabrics and composites using the fiber and hurd from the hemp stalks. He would sell these products to companies looking to replace cotton, plastic and wood.

“This will be so much more than farming,” he said. “We want to bring economic development to the community. Providing healthy products motivates a farm like us to help at the local level.”

The farm is located at the intersection of Warren, Vance and Franklin counties. In addition to growing hemp and producing raw material for wholesale as Brown is planning to do, he also wants to grow herbs, fruits and vegetables and create a farmers market.

With the change in his work schedule, Brown and his family have been able to be in town more often.

“My goal is to farm full time on the land I was born on,” he said. “To create a market, a teaching farm, and industries that help this community, that increase empowerment and leadership.”

Hailing from a family of entrepreneurs, Brown says creating his own business is what many who came before him had done. His great-great grandfather Byron was the first and many mirrored him.

The Brown family is descendant from the Oakley Grove Plantation in Vaughan, owned by Dr Lafayette Browne and his wife Mary Ann Faulcon. After the Civil War, Lucinda Brown took Byron and her other six other children to the town of Warrenton where she worked for another wealthy family. The Brown family was allowed to keep the name but without the “e.”

Byron worked and saved and began purchasing small plots of land that remains in the family to this day.

In addition to farming and building his business, Brown said one day he hopes to run for office.

An expert in the history of the area and his family, Brown thanks those who came before him for the inspiration to create something and never give up. Brown is also extremely grateful for friends and community members who have helped in some way.

“Thank God I know someone like Stacy (Woodhouse),” he said. “He has so many ideas and brings so much to the table, I can’t thank him enough.”

The two met through the Steverson and Taber families.

As part of another venture, Brown created The Connect Group in 2013, through which he does speaking engagements in person and on podcasts, and consults for small farmers.

As the 72 acres of soybeans and 6 acres of hemp grow out in the fields, Brown is doing numerous Zoom meetings for all his professional endeavors. And while keeping an eye on sales and working on ever-evolving plans, he’s also looking to start rebuilding some tobacco barns and removing some of the old infrastructure.

In addition to family and contractors, he welcomes volunteers and those looking to earn course credit at the college or high school level. The land also serves as a learning farm for the Golden LEAF Foundation. Some 200 interns from Winston-Salem State University have worked there and earned credits to date.

In the age of COVID-19, Brown spends more time on the farm and with the business than ever. His family history is the main source of inspiration to keep it all going.

“Even though we’ve had this land all these years, for my family to have overcome all the challenges, and operate so many businesses motivates me to move forward in agriculture,” Brown said.

“My ancestors gave me this opportunity. I can’t let them down by not utilizing this land for good. To use what we already have to expand and produce jobs. To bring economic development to this area, to heal, clothe and feed our community and give people a second chance at life.”