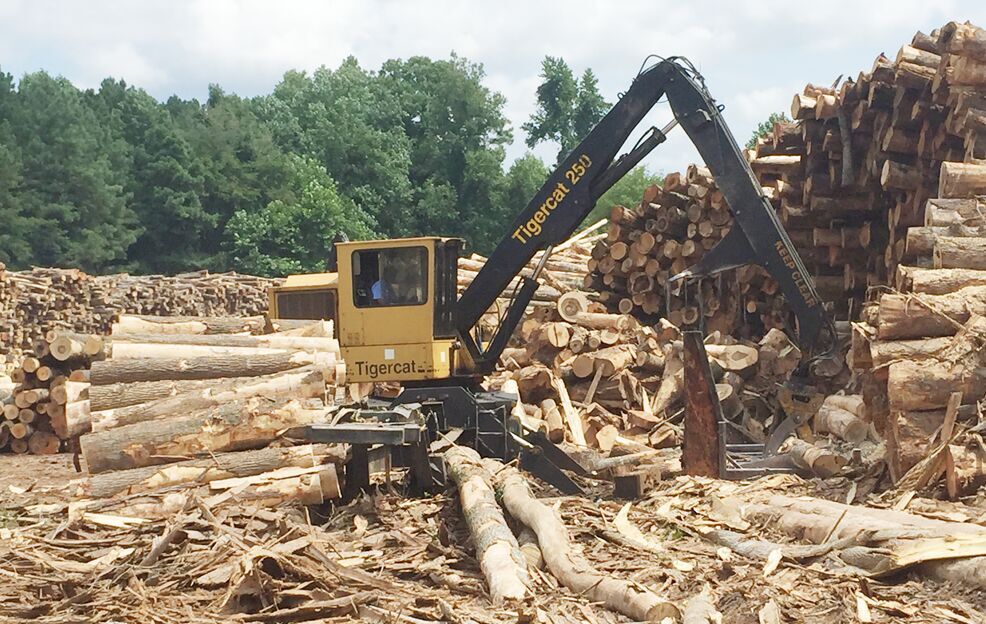 A crane operator at Smoke House Lumber in Inez moves some logs around at the back of the 13-acre site. 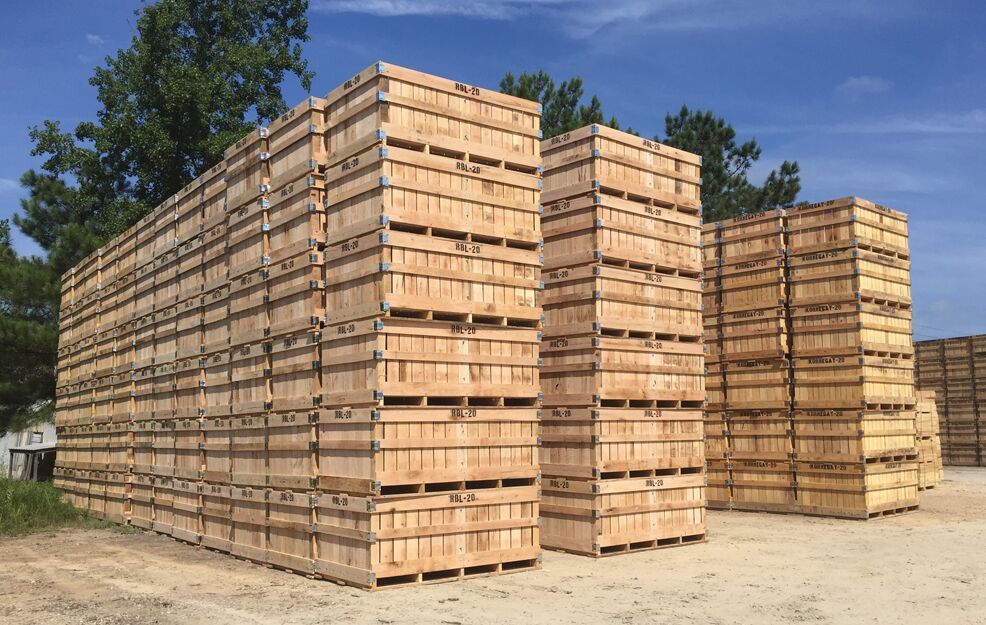 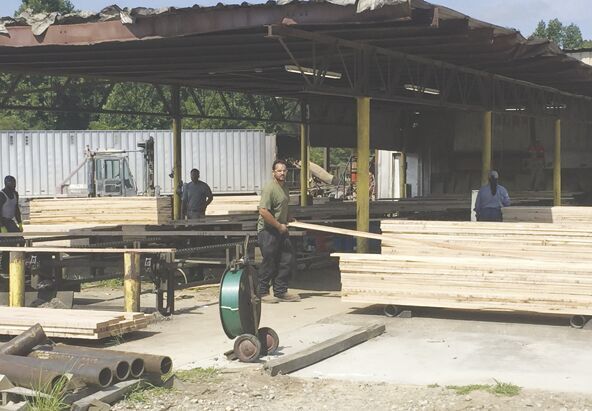 Employees at Arcola Lumber move some of the many boards they produce. 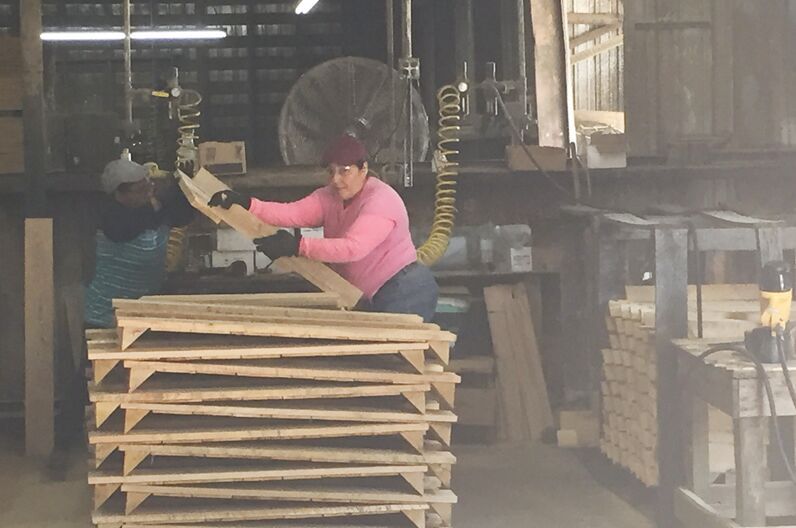 Employees at Arcola Lumber are hard at work on a hot day at the mill.

A crane operator at Smoke House Lumber in Inez moves some logs around at the back of the 13-acre site.

Employees at Arcola Lumber move some of the many boards they produce.

Employees at Arcola Lumber are hard at work on a hot day at the mill.

For anyone who’s ever seen the many trucks loaded with timber and lumber making their way through downtown Warrenton and all across the county, it’s clear this is a booming business.

Opinions will vary, and some are making more than others. But despite declining prices over the past 20 years, along with tariffs and the COVID-19 virus, the logging and lumber industry in Warren County remains strong.

This major economic driver in the county is responsible for some $42 million in revenue and more than 325 jobs with a payroll of approximately $13 million, according to a report published by NC State Extension on July 13. Statewide, the North Carolina logging industry contributed about $800 million to the state economy, supporting more than 8,200 jobs

In Warren County, the 204,945 acres of privately owned forestland consists of around 80 percent pine and 20 percent hardwoods. An estimated 70-80 percent of this land and the critical commodity that grows on it are managed by the NC Forest Service, along with companies and consultants in cooperation with landowners.

This management maintains the essential cycle of growing, thinning, harvesting and selling quality trees to saw mills and manufacturers that transform this raw material into a myriad of products. From paper, pallets and sweet potato boxes to silt fence stakes and flooring, furniture, housing and a whole host of other necessary products on which we all depend, Warren County is the place for wood.

Initial points in the right direction by Crystal Smith and Paul McKenzie at Warren County Cooperative Extension allowed for a better understanding and closer look at the size and scope of the county’s largest industry.

Whether it’s landowners, logging companies or saw mills, truckers, consultants or skilled workers, everyone involved plays an important role in the logging and lumber industry’s ongoing operation in this region.

However, due to the COVID-19 pandemic, the logging industry has sustained a 30-35 percent loss in the last three months, which translates to around a $60-70 million loss to the North Carolina economy. That loss is predicted to climb even higher amid the looming unprecedented situation.

Gary Harris has worked at Arcola Lumber — the company founded by his father and some partners including Amos Capps in 1952 — for the last 50 years. Despite the decline in prices, and even with business down because of tariffs and the virus, Arcola employs 50 people and Harris said they need more. “Anyone 18 or over,” he said.

From the 6 million feet of hardwood his 15 truckers bring in annually from forests within a 100-mile radius of Arcola, the company makes sweet potato boxes, logging mats and racking sticks. Harris said he sells mostly to North Carolina, Virginia and South Carolina.  He says he sold 60,000 boxes last year but won’t do as much this time around.

Having worked there all his life, Harris said he doesn’t know anything different. “I love the business and will keep doing ‘til I can’t. Some days get right trying.”

His father, Elmer, worked at the mill up until two weeks before he passed in 2008 at the age of 87.

Harris and his wife Donna’s daughter, Jamie, who Harris said started working at the mill when she was one and a half, and earned a degree in accounting from East Carolina, is also an integral part of the business.

Spending most of his time around the mill, Harris said the best part of the job for him is watching the wood get graded and meeting all the people he’s done business with over the years.

“It’s not just about cutting lumber but making a good product so that buyers want it, especially in these tight times,” he said. “I want to see the business continue to prosper and be as efficient as possible.”

To ensure this ongoing prosperity and efficiency, Harris said he follows a lesson learned from a Sunday school teacher: “Prior planning prevents poor performance.” It seems to have worked so far.

With an office at the corner of Macon and Main in Warrenton for the past nine years, the veteran forester and long-time industry consultant said he’s been working cheaper than ever these days. To save on expenses, he’s giving up the wood-paneled and animal-clad space for a home office in Macon where he can continue his work managing and selling timberland and timber.

“This whole county is about forestry,” he said. “I help my clients grow the most wood on their land in the shortest time.”

It takes 30 years for a pine to grow to maturity, where hardwoods take 60.

Yet, he said prices have gone down two-thirds over the last 20 years, not just here but along the whole East Coast. He said depending on the quality the going rate for the landowner was once around $3,000 per acre of 30-year old pines on managed land per year. Now it’s between $800 and $1,200.

“It’s hard to charge more commission when the price of the commodity has gone down,” he said. “I don’t see prices coming back. It’s all about supply and demand. If the saw mills have an overabundance they don’t have to pay as much. As long as we’ve got an oversupply it’s not going to get any better.”

But of course part of his job is getting the landowner the most for their trees from a logger. And while some will sell timber without going through a consultant, Wolgemuth said what he and around a dozen others like him do around the region is well worth what they charge.

He contends what the area needs is another mill. “More production means more competition,” he said. “There’s only a few places for landowners to go. Someone needs to think about building another saw mill in Warren County.”

In 2015, a German company named Klausner spent tens of millions to start building one in Enfield, but the project was scrapped around six months ago.

“It’s not profitable to keep (land) if timber stays at these rates,” Wolgemuth said. “Everything’s going up but we’re getting paid less.”

“Our primary job is fire control, but we also assist landowners by providing information and helping them manage their land,” said County Ranger Bryant Pitchford, who directs the Warren County branch of the NC Forest Service on Hwy 58 in Warrenton.

In addition to their duties as an emergency response agency, where they also might be called on to conduct a search for a missing person, Pitchford said the Forest Service helps educate the public and assists landowners in any way they can about the health and height of a tree, ideas for how to design the land, information about diseases and insects that could harm their trees, and selling their timber.

“We can write a management plan that helps landowners achieve their objectives,” Pitchford said.

Although the Forest Service doesn’t get into the financial side of things, Pitchford said there used to be 26 different logging companies in the area, where now there’s only around 10-15. “The 90s and early 2000s were the height around here,” he said. Pitchford said he’s heard from people who worry about cutting all the trees down, but assures them that will never happen.

“Our purpose is reforestation, to help replant and manage the land. I doubt you’ll ever see a time when someone’s not logging around here.”

Will Coleman, a fifth-generation logger, is vice president of Inez Forest Industries, Inc., the company his father Glenn and mother Dawn started in 1984. With 25 employees and eight trucks, IFI harvests pine and hardwoods from land within a 60-mile radius.

Working at IFI for the past 12 years, at the age of 33, Coleman said he’s in it for the foreseeable future. But he says the profit margin is small, and the virus has hurt the business to the tune of around 10 percent.

“The mills are cutting people and not buying as much,” Coleman said. “We just have to wait and see if they can get (COVID-19) under control.”

Meanwhile, his work continues, with orders coming in 50 weeks a year, and helping landowners create a timber management plan that keeps their forests in a constant state of rotation — cutting, thinning and planting.

“It’s challenging and evolving, and I learn something new every day about this industry,” Coleman said. “It’s a lot of hard work and long hours. Not many people want to do that. But it’s our livelihood, and I’m in it for the long haul.”

Coleman’s grandfather, Glenn — called Smokey because he was always smoking a cigar — built Smoke House Lumber up the road in Inez in 1985 and sold it to Warren Griffin in 2002.

Using every inch of the 12- to 13-acre site, Griffin said he buys only hardwoods from loggers operating within a 100-mile radius, and the mill processes some one million board feet per month.

Employing 85 people, the main product Smoke House produces is silt fence stakes and sells them all over the United States. “We’re probably the largest producer in the country,” Griffin said.

Operating as one company, Smoke House also shares space with Louisburg Hardwood and Louisburg Box and Palate to produce potato boxes and pallets. While Griffin said he’s had to make some adjustments, “Demand has not been down,” he said. “Everything is done in house, and everything that comes in goes out.”

For those truck drivers making those long, heavy hauls and difficult turns on Macon and Main in Warrenton and similar spots across the county and beyond, a loaded truck gets around 6 miles to the gallon. But the professionals behind the wheel take it all in stride.

At age 52, Randy Paynter of Norlina has been driving a truck since he was 18, and worked at Smoke House for the past 15 years. He fills up his 100-gallon tank every day and typically drives 2,500 miles a week.

“Macon onto Main is definitely the toughest I’ve seen,” he said. “There’s lots of others like it, but if you can make that turn, you’re a truck driver.”

After nearly 35 years on the road, he’s never had an accident and tries to avoid plowing into obstacles such as buildings and telephone polls.

“We try not to do that,” he said. “We might not get a lot of respect (out there on the road) but we look out for ourselves and everyone else.”

They're just trying to get the wood where it needs to go.