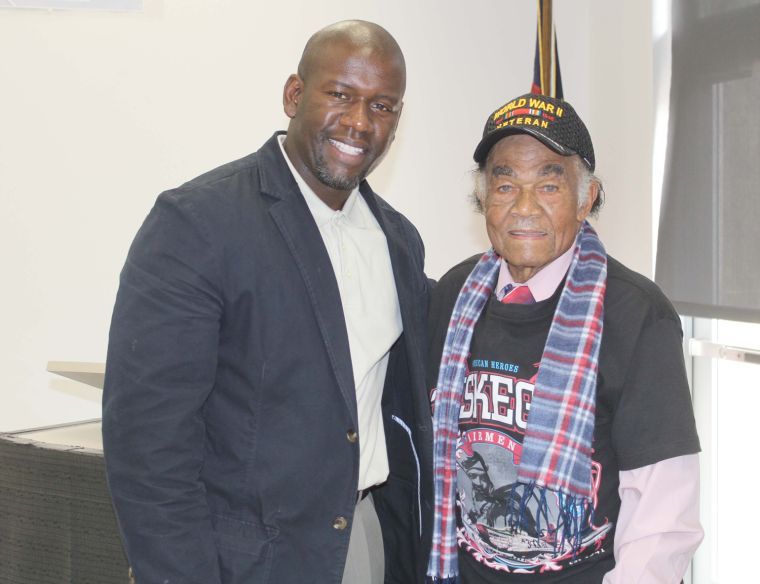 Joel Miller, WWII veteran and Tuskegee airmen talks to New Tech students about his life in the military and lessons he has learned during a lunch seminar.

Joel Miller, WWII veteran and Tuskegee airmen talks to New Tech students about his life in the military and lessons he has learned during a lunch seminar.

Michael Williams, U.S. History teacher at Warren New Tech High School, has discovered that being a participant in The Warren Record’s Newspaper In Education program is more than just free newspapers for his classroom. As a result of his involvement in the literacy program he was able to set up a lunch seminar with Joel Miller, a local veteran and Tuskegee airman who was featured in The Warren Record’s Nov. 6 edition.

Williams had previously been teaching about War World II, and the Tuskegee Airmen in particular, in class and knew that a classroom visit with Miller would be a unique learning experience for his students. As a self-proclaimed “certified history geek,” he was excited at the prospect himself.

On Friday, Nov. 15, 44 New Tech students and various teachers filled the seminar room to meet and listen to Miller talk about his life, military experience and overcoming adversity. Miller charged the students to “set aside a goal, find something you can be a part of and work for it. Don’t limit yourself.”

Miller talked about life as a young African-American man prior to the Civil Rights Movement and about how Martin Luther King, Jr. gave peaceful unity to those seeking change.

When asked by a student to define his greatest moment in life, he simply responded with a smile and replied, “Learning to fly.”

A question and answer period was filled with questions about Miller’s time in the military, his inspirations and life lessons he learned along the way. When asked about injustices and struggles he has had to overcome in life, Miller said, “I’ve been making lemonade.”

Miller finished by saying that his biggest dream as a child was to become a man. He would wear elevated shoes to feel taller, but came to learn that being a man was not about physical height or stature. It was about knowledge, “what you put in your control tower,” that makes the man, he said.

“He was really inspirational and inspired me to do what I want in my future, and also that no dream can go untouched,” Richardson said.

“I think that the seminar lunch was indeed a great idea. Thanks to Mr. Williams. Without him we wouldn’t have been able to have this great chance.  Having Joel Miller here was a great opportunity, and it taught me a lot of about history,” Alston said.