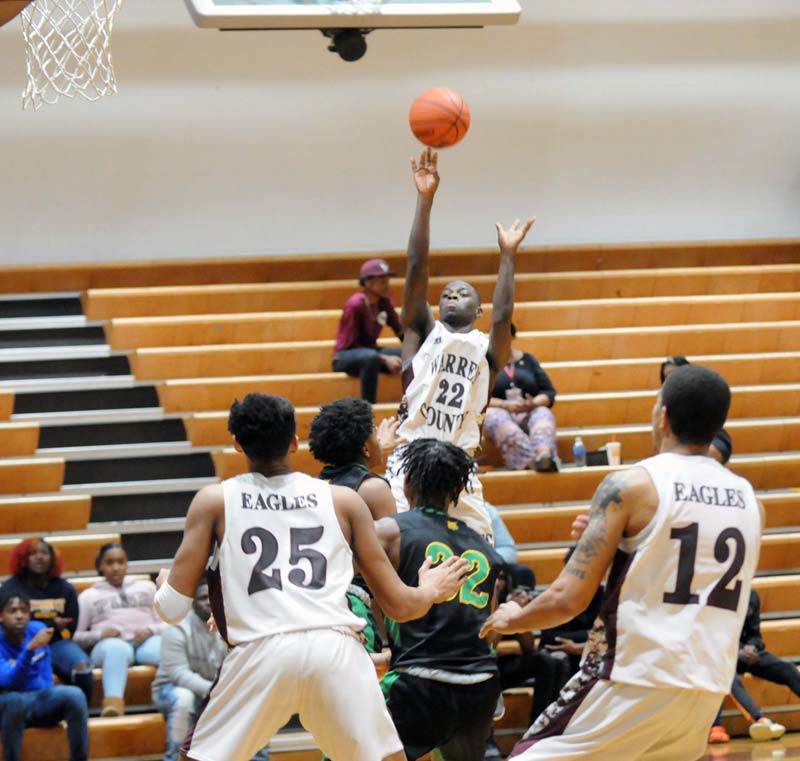 Warren County’s Joshua Henderson (22) skies above everyone else to get off a shot as the Eagles defeat Bunn High School on Monday to advance to the semifinals of the Northern Carolina Conference Tournament. Henderson finished with 13 points. 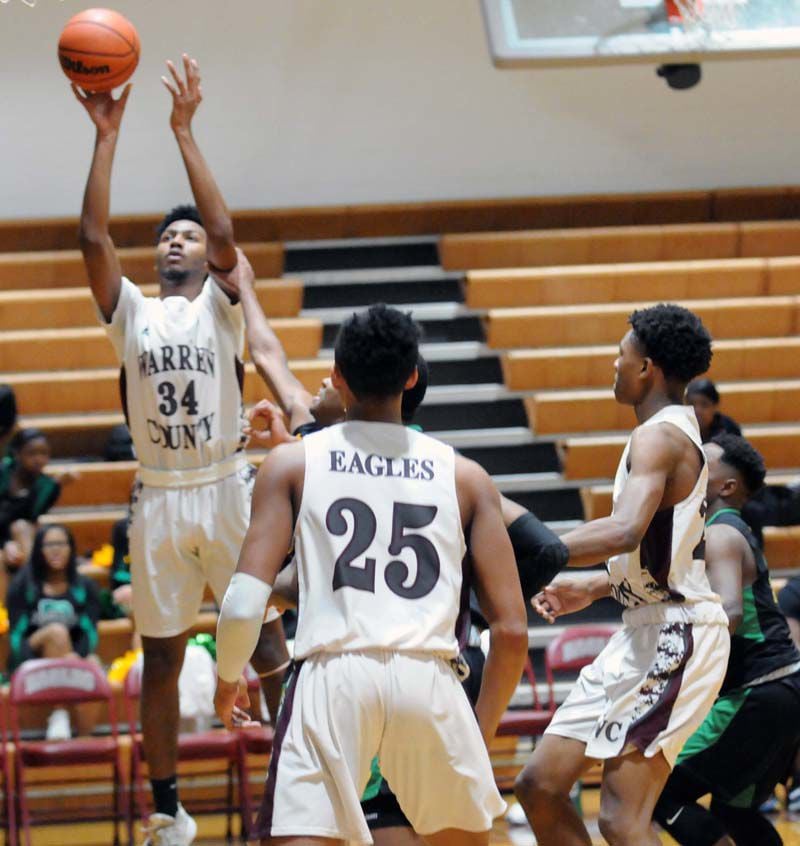 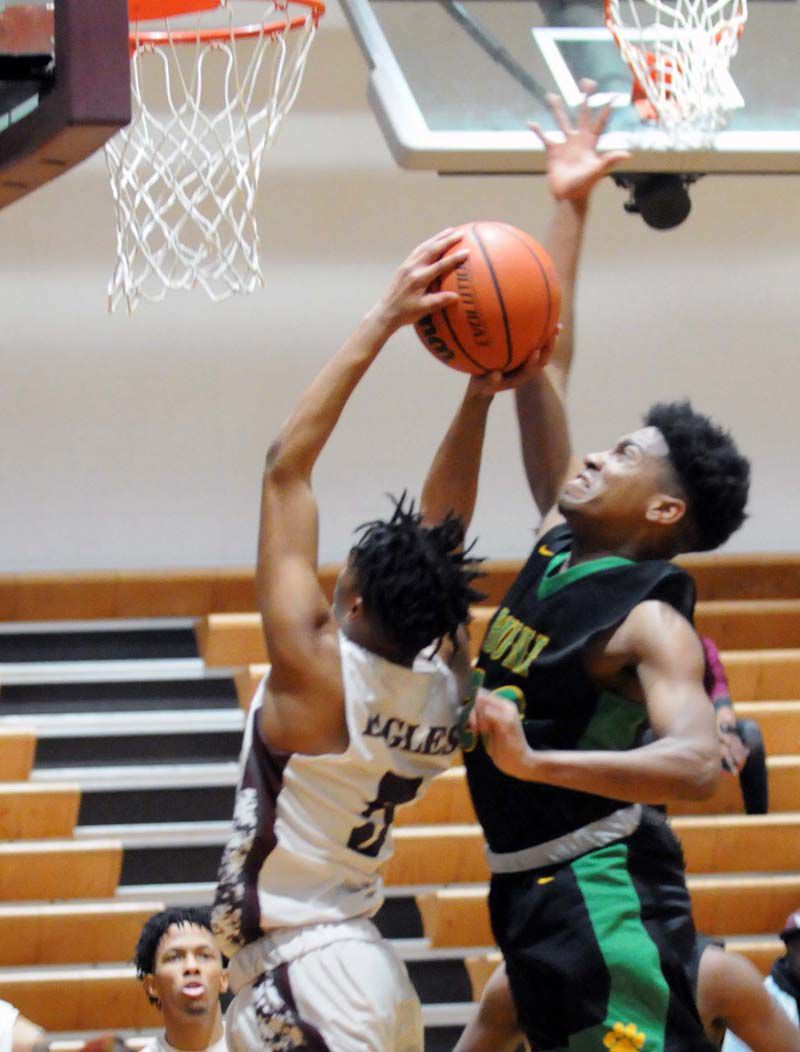 A Bunn defender has something for Warren County's Joshua Robinson (5) under the basket Monday night.

"It's going to be a dogfight. I'm looking forward to it."

The first half of Warren County’s Northern Carolina Conference tournament matchup Monday at home against Bunn looked like a game that might showcase parity amid the league standings.

Instead, the third-seeded Eagles’ 69-48 win over the No. 6 Wildcats shined a light on the drastic improvement coach T.J. McRae’s Warren County varsity boys’ basketball team has made down the season’s stretch.

No. 2 Granville Central, led by a dynamic duo of scorers, awaits the Eagles at 6 p.m. tonight in the semifinals at South Granville High.

Following an impressive victory on Friday, Warren County’s girls’ team might also be peaking at the right time despite being eliminated 41-39 Monday in its tournament opener at Granville Central.

Z’hnyah Henderson led Warren County with 18 points, and Nakira Bullock had 11 points for the Eagles, who will learn their Class 1A state playoffs fate on Saturday.

Warren County’s varsity boys appear to be in more solid shape to earn a playoff bid, strengthening its case Monday by running Bunn out of the gym in the second half and outscoring the Wildcats 29-12 in the closing frame.

“That fourth quarter was the epitome of how I want our team to play,” said McRae.

Unbeaten South Granville and second-place Granville Central are clearly the class of the Northern Carolina Conference in front of a tightly-contested middle of the pack. Warren County and Bunn finished the regular season separated in the standings by only two games, with J.F. Webb claiming the fourth seed and Louisburg the fifth.

Warren County, which started the season 1-6 overall, lost its first game against Bunn in overtime before winning the second matchup by two points.

The Panthers finished the first half of Round 3 Monday on an 8-0 run before the Eagles dialed up the pace with a smaller lineup consisting of Deaven Hawkins, Roshene Mills, Josh Henderson, Andrew Smith, and Jeremy Daniels.

Mills’ 17 points and 12 rebounds led Warren County, which shot a smoking 64 percent from the field in the second half and made transition buckets the norm following a first half highlighted by the play of Bunn’s 6-foot-7 post player Xavier Jones and diminutive guard Jaylen Perry (five total 3-pointers).

“I don’t know how he does it,” Mills said of McRae’s halftime adjustments, “but he always says something that clicks in our minds.”

“The easiest points to me are layups,” said McRae. “And how do you get layups? Playing good defense and getting the ball in transition.”

That philosophy was best illustrated in the second half with a block of a 3-pointer by Henderson, who grabbed the ball and pushed it down to the other end, dumping it off in the paint for a Smith score.

Smith finished with 11 points, and Henderson (13) and Daniels (14) also scored in double figures.

McRae and assistant coach Bryan Fuller’s next task is figuring out how to contain Granville Central guards Terence Harcum and Jamari Mann.

The Eagles lost the regular season games against Granville Central 85-53 and 82-63.

“Really good team,” said McRae, “so we’re going to have to find a way to hone in on those two. It’s going to be a dogfight. I’m looking forward to it.”