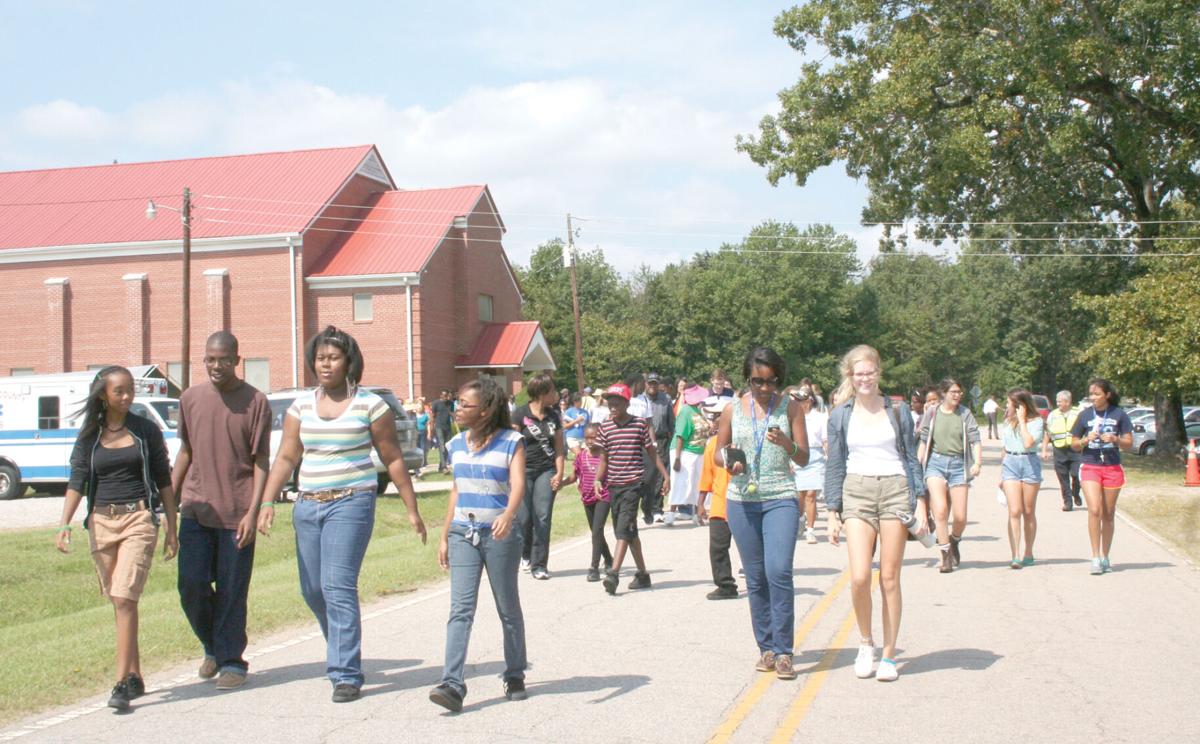 People of all ages participate in a commemorative walk during the observance of the 30th anniversary of the PCB protests. 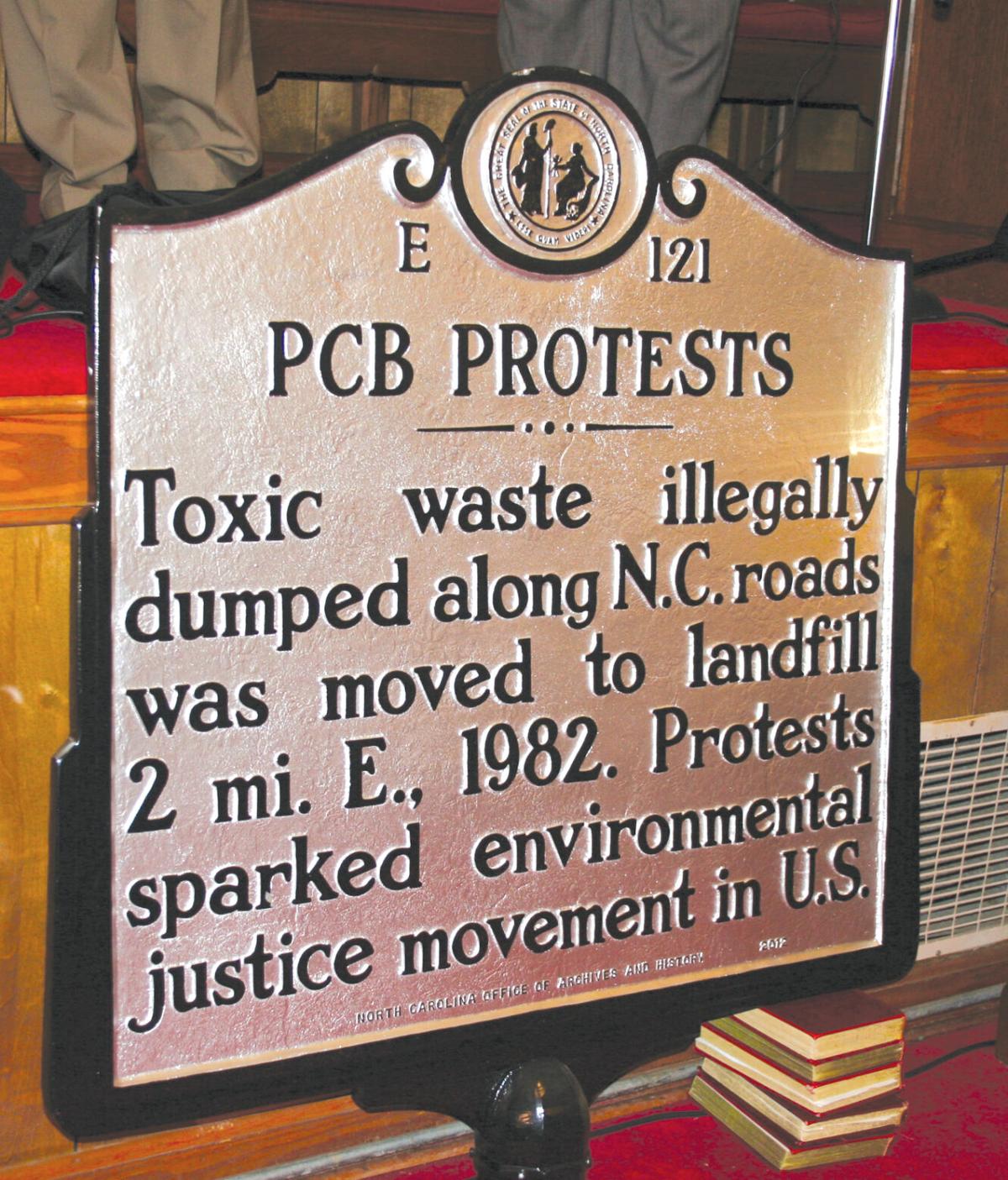 A historcal marker honoring the 1982 PCB protests was unveiled in 2012 and may be viewed on Hwy. 401 in the Afton Community.

A team of individuals from Warren County and beyond is working together to plan a 2022 commemoration of the 40th anniversary of protests against the PCB landfill built in the Afton area in 1982.

More than 350 people participated in the 2012 commemoration of the 30th anniversary of the protests held at Coley Springs Missionary Baptist Church.

Construction of the landfill followed years of public outcry, resistance and legal actions that came after transformer oil contaminated with toxic polychlorinated biphenyls (PCBs) was illegally sprayed in Warren and 13 other counties in 1978.

The state of North Carolina and the federal Environmental Protection Agency chose the poor, rural and mostly minority Warren County for the PCB landfill, which they claimed was safe and would not leak.

In 1982, as trucks began hauling in 10,000 loads of contaminated soil from more than 200 miles of North Carolina roadways, protestors from Warren County, supporters of their cause and Civil Rights activists marched and lay down in front of the trucks. More than 500 arrests were made during about a six-week period, and what is now known as the environmental justice movement was born.

Bill Kearney, coordinator of the Warren County Environmental Action Team, said that while the 2012 observance was a monumental event for the Warren County, it is important to commemorate what the protests meant every 10 years.

“It is important to keep the story fresh,” he said. “It is especially important in the current circumstances with more emphasis on environmental issues.”

A critical component of the 2012 commemoration was a project to interview as many of the people involved with the 1982 protests as possible and produce a video archive of those interviews. Videos of the interviews and other resources related to the 30th anniversary commemoration are available on the Warren County African American History Collective website, wcaahc.com. Click on “History.” Kearney noted that a partnership with the UNC Center for the Study of the American South allowed for the site to be developed.

Kearney said that the accounts of people involved in the PCB protests are just as important today as they were in 2012.

“We need to ensure that the stories are not lost,” he said. “People don’t realize the power of their collective voices.”

The team working together to plan the 40th anniversary commemoration includes representatives from the Wilson Library and the Center for the Study of the American South at the University of North Carolina, the Warren County branch o the NAACP, the Warren County Community Center, Warren County Memorial Library, former Congresswoman Eva Clayton, Warren County Manager Vincent Jones, Warren County Commissioner Bertadean Baker, the local faith community, local citizens and others involved with the 2012 observance, including Wayne Moseley, now retired from Living Arts College, and Jenny LaBalme, a journalist and photographer who also took photographs here in 1982 while a student at Duke University.

The team will continue to gather information related to the protests. Kearney said that the group plans to interview more people who were involved in the protests to make sure that their roles are documented.

Events are in the works that will allow community residents to bring articles and photographs from the time of the protests and to share their stories.

The team will partner with the Wilson Library to create a display that will be housed in the library throughout 2022 with the hopes that a virtual display will allow those who can’t make it to Chapel Hill to share in the gathered history as well.

Kearney said that, looking beyond next year, the team hopes to develop a relationship with the Wilson Library that would allow the Warren County Memorial Library and Warren County Community Center access to archives.

The team is working toward holding a large-scale commemoration on Sept. 17, 2022.

Kearney and other members of the team hope that ongoing efforts to preserve the  history related to the PCB protests will inspire local residents to think of their county as an example of resiliency.

“We hope that the community will look at Warren County history as something good came out of something bad, how to move forward since we are on the cutting edge of social justice practices,” he said.

Kearney reflected on the continuing work from the standpoint of his role as a minister.

“I believe we all are the temple of God,” he said. “God wants us to take care of our temple, our physical bodies, but we must also be good stewards of the environment; equity and justice for all.”

Kearney and members of the team want the 40th anniversary commemoration will inspire the community for years to come.

“We believe the 2022 celebration will be a large-scale commemoration, but it will also inspire us, just like 1982 when everyday people came together and birthed a movement,” he said. “Together, we can move mountains.”