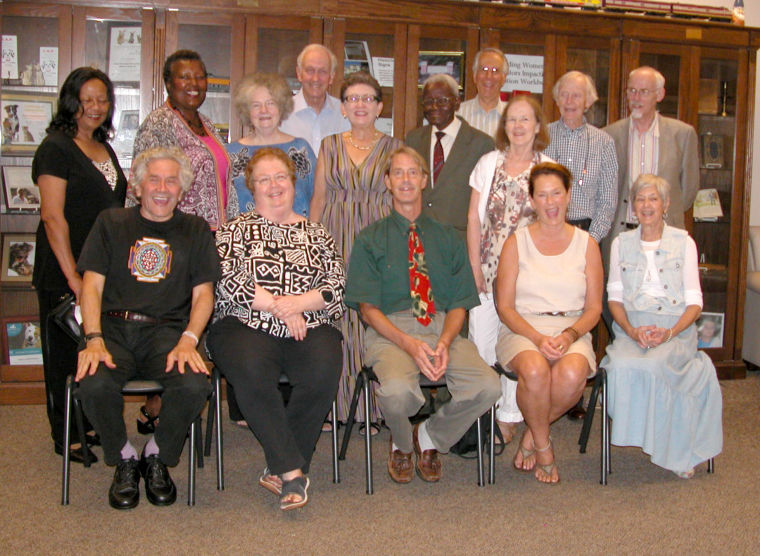 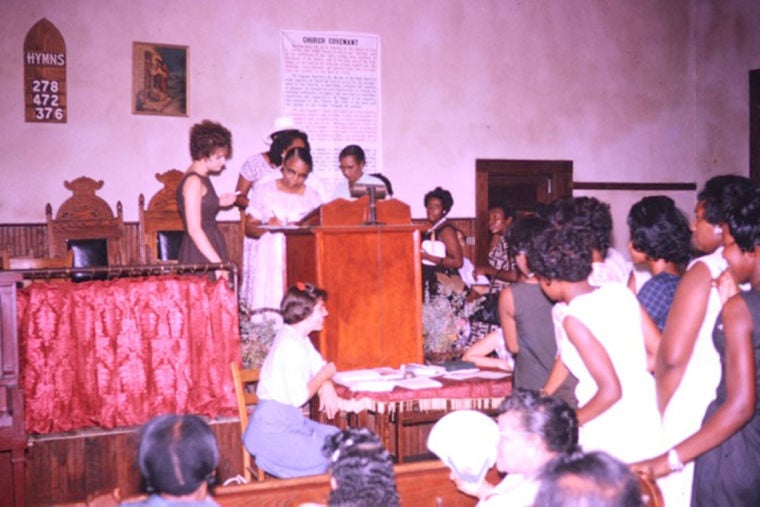 In this scene from 1963, college students participating in the American Friends Service Committee’s Citizenship Education Project in Warren, Vance and Franklin counties lead a mock election at Brookston Baptist Church in Henderson to help local residents learn about the voting process.

In this scene from 1963, college students participating in the American Friends Service Committee’s Citizenship Education Project in Warren, Vance and Franklin counties lead a mock election at Brookston Baptist Church in Henderson to help local residents learn about the voting process.

Participants in the 1963 American Friends Service Committee (AFSC) Citizenship Education Project gathered at the Warren County Memorial Library on Saturday with local residents to commemorate the 50th anniversary of their work to increase awareness of voting rights among local residents, especially African-Americans.

Fourteen college students from eight states, Great Britain and Africa lived in Warren County from June 29-Aug. 23, 1963 during what is often referred to as the Warrenton Voting Rights Project.

Clayton told the group gathered for the 50th reunion that when she and her husband, T.T. Clayton, came to Warren County in 1962, they found a sense of apathy among local residents. She wrote to the AFSC, a Quaker organization, to see if they would be interested in coming to North Carolina.

Clayton said that African-Americans have made progress since 1963, a time of segregation when they did not participate in government. Today, she added, African-Americans lead the county and its school system, and hold a number of local elected offices. However, issues such as poverty and unemployment still affect many people.

“(The 50th reunion) allows us to reflect as a community, where we were, where we are,” Clayton said. “There is still work to be done, but we must be grateful for progress.”

Payne Masuku, an educator in the Republic of Zimbabwe in southern Africa who was part of the 1963 Citizenship Education Project, compared 1963 and 2013. He recalled listening to Dr. Martin Luther King, Jr.’s “I Have a Dream” speech at the Lincoln Memorial during the 1963 March on Washington, and the participation of President Barack Obama and former Presidents Jimmy Carter and Bill Clinton during the 2013 50th anniversary commemoration.

Masuku noted some similarities between 1963 and 2013, especially the time of civil war in Vietnam in 1963 and conflict in Syria at the present time.

He said that, in 1963, social and economic issues caused tension in the United States. The main concern was segregation, evidenced at lunch counters and at schools, on buses and in many areas of life. Today, Masuku said, top concerns include the jobs market and recent Supreme Court rulings concerning the Voting Rights Act.

He recalled that while he was in Warren County in 1963 as part of the AFSC group, he worshipped at Coley Springs Missionary Baptist Church and found assistance at Warren County Memorial Library, where he did not know how he would be received.

California resident Judy Beil Vaughan outlined the experience of the college students who participated in the AFSC’s work here in her book, “A Quiet Little Civil Rights Project,” which is available at blurb.com.

Her recollections focused on “how a group of people participating in a little movement came to become a national phenomenon,” Vaughan said.

As she made plans for her book, she used Internet resources to try to locate other participants in the Citizenship Education Project, finding that many now reside in California. Vaughan discussed ideas for writing a memoir of the summer experience and began gathering documents related to the group’s work.

She recalled that, in 1963, the group gathered in Durham for orientation. Among the people there were Eva and T.T. Clayton. Vaughan said that the AFSC had promised those in Warrenton that their work would be a non-violent education project of citizenship with no sit-ins.

She said that the students focused on the Warren, Franklin and Vance County area because 95 percent of African-Americans were not registered to vote and to address illiteracy at a time when often people were asked to read part of the Preamble to the U.S. Constitution in order to register.

Vaughan recalled that when the college students and their adult leaders arrived in Warrenton, it was a Saturday. A noisy wedding party was traveling through town at the same time, so, the students learned, some local residents believed that the horn honking they heard was the AFSC group announcing that they had come to demonstrate. The group also saw evidence of segregation on signs marking a “whites only” laundry and in observing that only African-Americans seemed to be in town that day.

The interracial group settled in rooms over Brown’s Superette and Grill, owned by Warrenton residents Gaynell McCoin Brown and his wife, Sallye H. Brown. The following day, the students began introducing themselves to the community. They participated in the Shiloh Church Union, a full day of services with a break for lunch. That evening, the students were introduced to more local residents at the Hecks Grove Memorial Recreational Forest, which was known as a safe haven for African-American youth to gather. Vaughan recalled that local minister, the Rev. G.E. Cheek, spoke.

The AFSC youth participated in a variety of community work, including church and cemetery clean-ups and assisting in the tobacco harvest, as well as visiting homes to let local residents know about voter registration and the workshops they would be conducting on “You and Your Vote,” “How to Register” and “Know Your Candidate,” which included mock elections.

Their time here also included an integrated social event at the Warren County Community Center on Franklin Street, and the students witnessed a group baptism at a site at the Warren-Franklin County line.

Vaughan said that on the group’s last Saturday in Warren County, they decided to conduct a “mild act of civil disobedience.” Several members of the group, including a young African-American woman, went to a local “whites only” laundry. Vaughan noted that they were asked to leave, but their laundry had already “integrated” the business, because the entire group’s clothing had been taken there to be washed throughout the time they were in town.

She said that she wondered if she and the other students had helped Warren County residents, but they received various tokens of appreciation, including a written tribute from a local pastor.

“If it were not for the black clergy, you would not have been able to accomplish what you did in 1963,” Dunston told the AFSC group.

In reflecting on progress from 1963 to present day, he noted that printed signs of segregation and discrimination are no longer used, but more inward signs are still present.

“We have desegregated the social environment, but whether we have integrated is still a horse of a different color,” Dunston said.

He added that voting rights remain among the most critical issues facing African-Americans today.

Dr. Ray Gavins, professor of history at Duke University and husband of Thurletta Brown-Gavins, whose family played an important role in the 1963 Citizenship Education Project, reflected on the historical context of the 1963 project and the 2013 commemoration.

He found parallels in the concerns about voting rights both then and now, as well as the original and commemorative Marches on Washington.

“There has been progress, but there are continuing deep race and class disparities,” Gavins noted.

He referred to the current Moral Monday protests, the Civil Rights movement that emerged from the Montgomery, Ala. bus boycott, the Southern Christian Leadership Council, the NAACP and other groups. Gavins noted that the AFSC student group came into an environment of segregation in 1963 and made a difference in the lives of many people.

“I think there’s no argument that the project contributed conclusively to sow the seeds in Warren, Vance and Franklin counties ... for returning African-Americans to the Legislature and, ultimately, Congress,” he said.