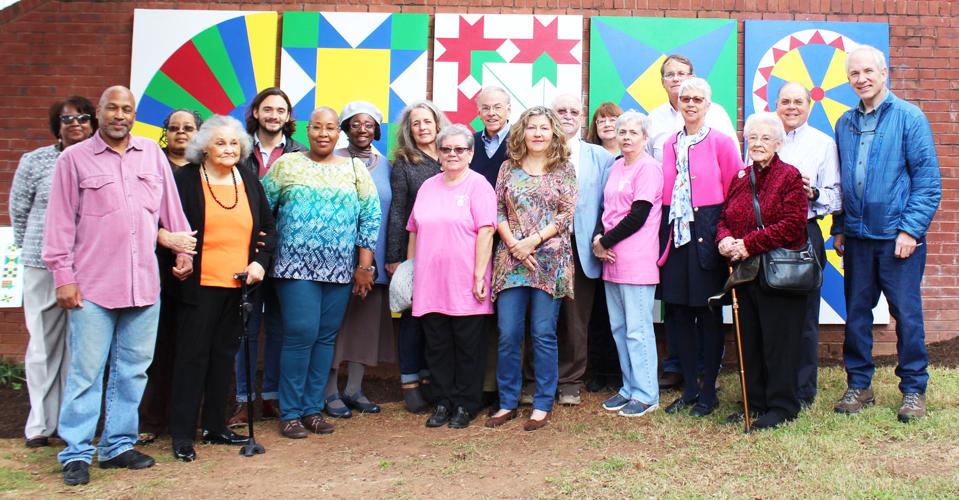 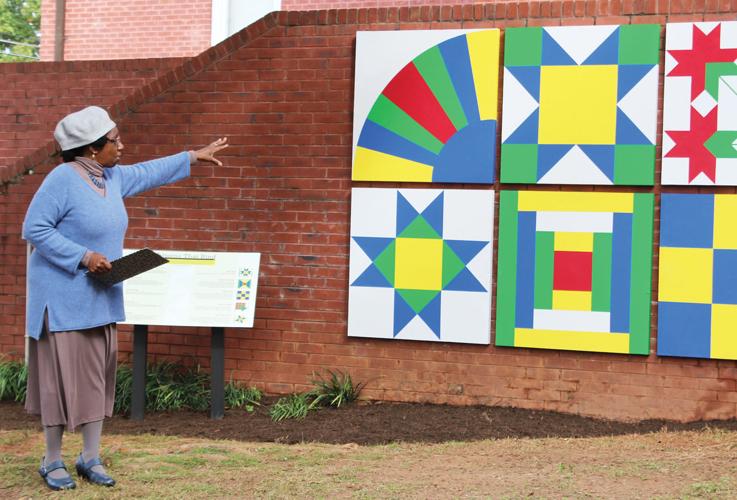 “If one could measure a community’s vitality by the quality and beauty of its quilts, Warren County, North Carolina would radiate energy.”

This observation by Warrenton’s Quilters Lane Committee member Jereann King Johnson can be found on signage at Quilters Square on Warrenton’s Courthouse Square next to the newly-installed Patterns That Bind wooden quilt block display. The design, featuring 10 blocks with quilt patterns traditionally used in Warren County, was officially dedicated during a Nov. 1 ceremony.

Charla Duncan, co-chairwoman of the Quilters Lane Committee overseeing the Quilters Square, said that the Patterns That Bind is the latest step in the committee’s ongoing design project to boost the area around East and West Market Street. She noted that the importance of quilting in the community is evident because the area is bookended by the Aaron Hendrick House, now home to the Heritage Quilters, and downtown  businesses Quilt Lizzy and Friends Two.

Warrenton Mayor Walter Gardner described the dedication as exciting, noting that quilting has returned to its place as a strong tradition in Warren County, thanks to the work of the Heritage Quilters, Friends Two and Quilt Lizzy.

He added that many people assisted in making the quilt square project possible, from government boards and town and county departments to individuals.

Johnson said that the idea for Patterns That Bind developed  nearly two decades ago when she talked with Peggy Richardson of Warren County Economic Development. The two concluded that quilts and quilting could become a bridge to bring the people of Warren County together. The Heritage Quilters went on to document the patterns that typically make up local quilts, and this research served as the inspiration for the quilt block designs.

With the help of Betty Rollinson and Deborah Robertson of Friends Two, colors for the quilt blocks were finalized, and the completed designs were painted by Warren County artist Victoria Lehman.

The exhibit features 10 painted 3-feet by 3-feet wooden blocks and can be found in the area behind the Warren County Tax Office. Each quilt block was funded by a community sponsor.

Grandma’s Fan: dedicated to Nell Hicks, Daisy Reavis and her grandmother Reavis by a “freezer locker friend” to represent the love that Hicks’ mother and grandmother had for making quilts with the design.

The North Star: Sponsored by the Heritage Quilters, the pattern was selected to signal hope for the local quilting tradition. The quilt block design was made by Crystal Myrick.

Carolina Lily: Friends Two and the Knit Wits sponsored the square, based on a pattern that many quilters want to try making.

Cog Wheel: The block was sponsored by Kimberly Harding and Cliff Jackson to honor the skill of quilters in the Olive Grove community. Among them was Bessie Wright Fitts, known for making the cog wheel pattern.

Cherry Basket: Sponsored by Oakley Hall Antiques & Art. The design was inspired by Helen Mitchell of Ridgeway, who moved to New York City and returned with fancy quilts, some made in the Cherry Basket pattern.

Eight Point Star: Sponsored by Cynthia Jenkins. The pattern honors the tradition of using any material available to sew quilts and Portia Jenkins Harris of Warrenton, who made an Eight Point Star quilt using feedbags.

Johnson said that the featured quilt patterns continue to be an important part of the local quilting tradition.

“What makes (the display) special is that all (of the patterns) are connected to people in Warren County,” she said.

Duncan said that the interest in the quilt block project was evident when sponsorships were filled in under two weeks.

Tom Hardy, Warrenton town commissioner and co-chairman of the Quilters Lane Committee, praised the work of the community to make the Patterns That Bind project possible with the support of the Warren County Board of Commissioners, Warrenton Town Board and Quilters Lane Committee. County Manager Vincent Jones also praised the success of the county-town-community partnership.

Those attending the dedication ceremony also celebrated the installation of stepping stones crafted and painted by Warrenton artist Michael Layne. His design features the Carolina Lily pattern,  linking the stepping stones to the Patterns That Bind display.

As those attending the dedication looked from the quilt blocks to the stepping stones to Layne’s previously installed Garden Whispers sculpture, Lehman said that the Patterns That Bind exhibit was made possible through a total community effort.

“It represents what you can do with the support of the people around you,” she said. “This is something unique to Warren County. Everyone in the community made it happen.”