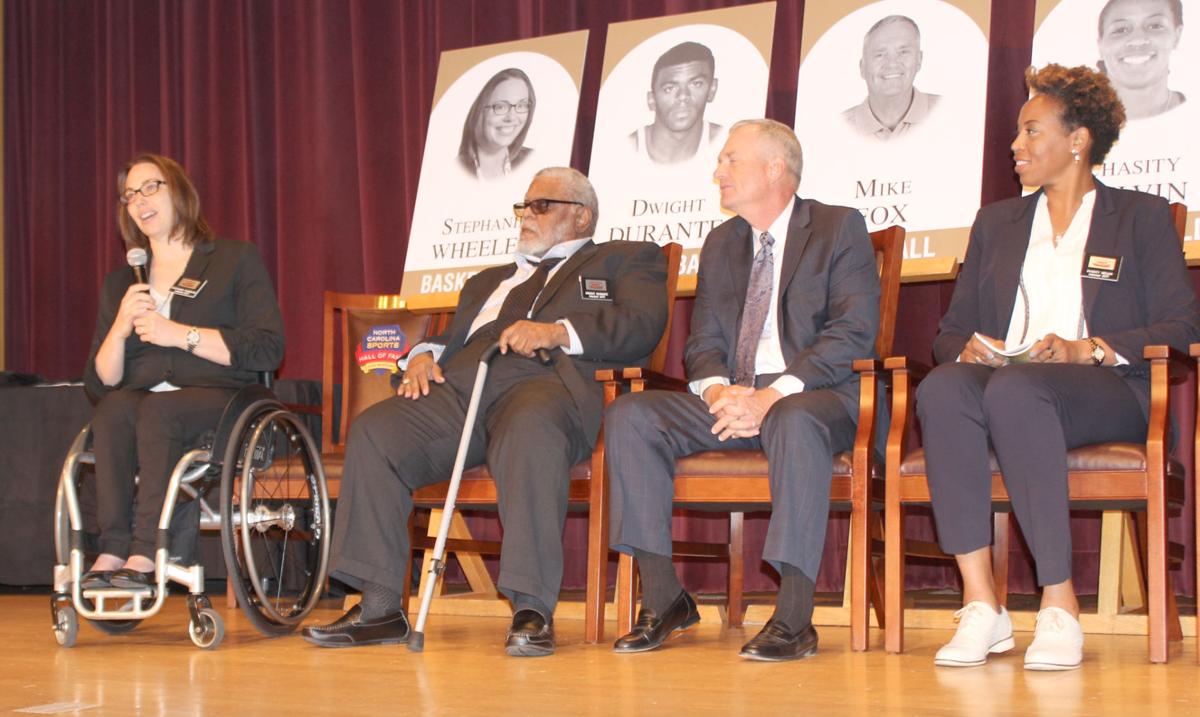 Norlina native Stephanie Wheeler, at left, addresses reporters and others during a media conference on Thursday held in conjunction with N.C. Sports Hall of Fame induction ceremonies. She is pictured with fellow 2017 inductees Dwight Durante, Mike Fox and Chasity Melvin. 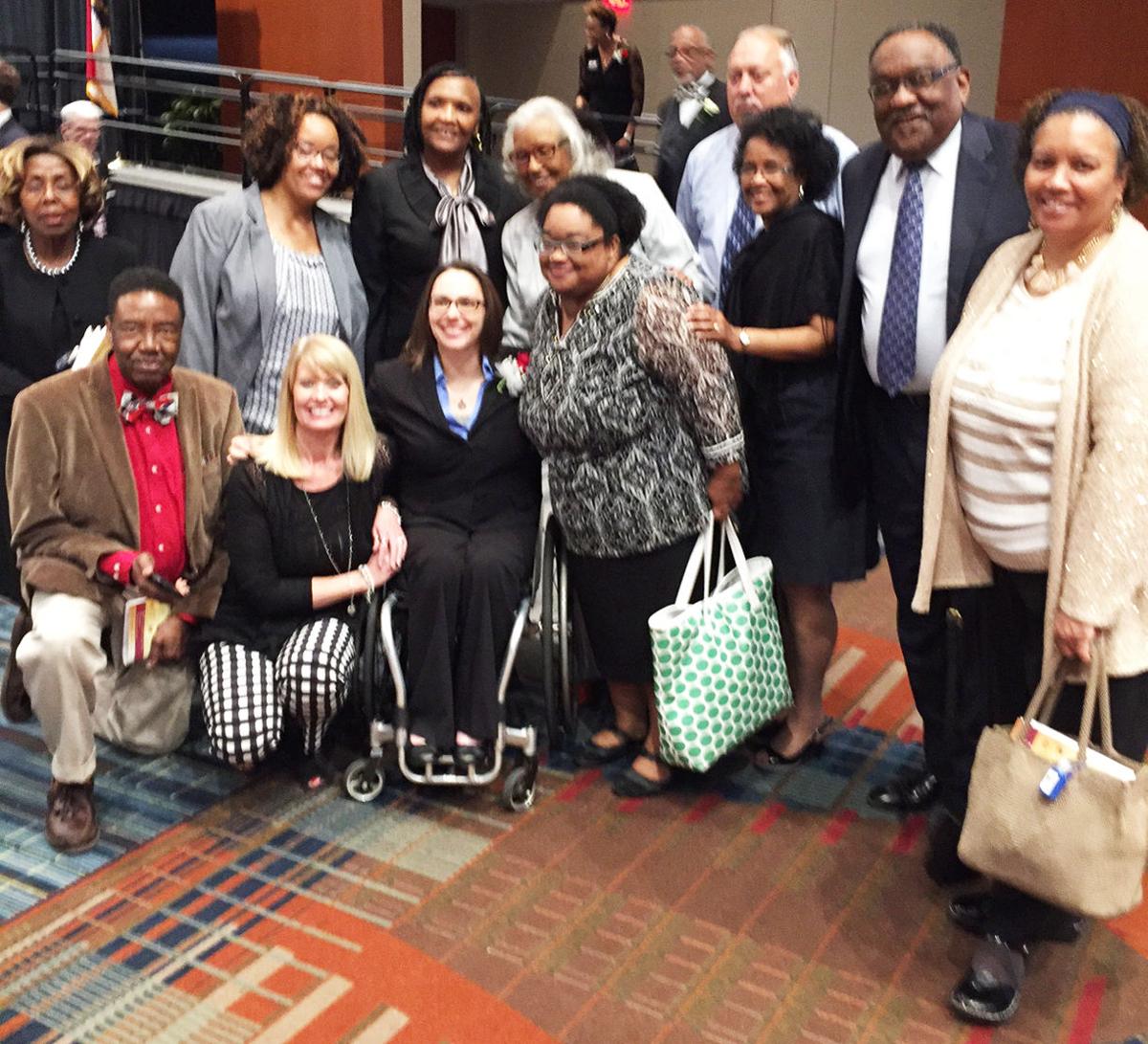 Norlina native Stephanie Wheeler, at left, addresses reporters and others during a media conference on Thursday held in conjunction with N.C. Sports Hall of Fame induction ceremonies. She is pictured with fellow 2017 inductees Dwight Durante, Mike Fox and Chasity Melvin.

Norlina native Stephanie Wheeler last week added one more accomplishment to her long list of academic and athletic achievements: she was inducted into the N.C. Sports Hall of Fame.

A life of determination

Wheeler has developed a reputation for success in everything she attempts. However, in her home county of Warren, she was known as an example of overcoming adversity through determination long before she graduated from high school.

When she was 6 years old, an automobile accident left Wheeler paralyzed from the waist down and without parents. What happened after that was the subject of discussion when N.C. Sports Hall of Fame representatives Don Fish and Nat Walker visited Norlina several months ago to talk with several local residents about Wheeler’s upcoming Hall of Fame induction.

At that time, Walker said that during a drive through the area, he noticed the sign at the Norlina town limit honoring Wheeler for her achievement in the Paralympics, but did not recognize her name. Walker researched Wheeler online and suggested that she should be included in the Hall of Fame. After three years of efforts, Wheeler was elected.

A repeated theme during the meeting in Norlina was that Wheeler could have become discouraged and bitter following the accident that changed her life as a child, but, instead, faced each day with a smile on her face and determination in her heart.

She was raised by her grandmother, Julia Wheeler, who talked with her granddaughter about surgeries that could enable her to walk. However, Stephanie turned them down, saying that she could move just fine in her wheelchair.

Fish and Walker learned that Stephanie was involved in many activities at Warren County High School, including the marching band and health occupations classes that included instruction in a hospital setting. All the while, she worked to be independent, never letting a wheelchair stand in her way.

That determined spirit continued through her undergraduate studies at Illinois, graduate work at the University of Alabama and today, as she works toward a doctoral degree in Cultural Kinesiology at Illinois.

Joining the Hall of Fame

The group was honored with a media conference and gala reception on Thursday at the N.C. Museum of History and Hall of Fame and induction banquet on Friday at the Raleigh Convention Center.

Stephanie learned that she had been selected as a member of this year’s Hall of Fame class when Nat Walker called her in December.

“I knew I had been nominated one other time, but I didn’t know if my name was still in the running,” she said at the media conference.

For someone accustomed to celebrating accomplishments with her teams, Stephanie was honored to be selected to the Hall of Fame, but admitted that it felt awkward to be singled out for an award.

She was grateful to residents of her home county for supporting her through her life.

“To the people of Warren County, I say a big thank you,” Stephanie said. “The great thing about growing up in a small town, a small county, is that you share success. I appreciate everyone who helped me get to this point.”

During her speech, Stephanie said that she was grateful to grow up in the state of North Carolina, where passion about basketball runs deep. She also expressed gratitude for the opportunity to represent athletes with disabilities as a member of the Hall of Fame.

Only her partner, Laura Fitch, was able to travel from Illinois with her for Thursday’s activities, but Stephanie had an idea that a large contingent from Warren County would be arriving for Friday’s gala.

She was right. Some 30 people — her grandmother, aunts, uncles, family friends, school system representatives and more — filled three tables at the Hall of Fame gala.

The local group enjoyed gathering to talk about Stephanie and, as her grandmother put it, “how she brightens up everyone’s day.”

Julia was impressed with the Sports Hall of Fame display, featuring Stephanie’s No. 10 Team USA jersey and video highlighting her granddaughter’s life.

“Who would have thought a little old girl from Warren County (would have achieved this)?” Julia said. “Grandmother had to cry a little bit.”

She enjoyed Stephanie’s speech, especially when he granddaughter said that it took a village to raise her.

Julia described the gala as fabulous and said that Stephanie’s humbleness, determination and achievements impressed everyone there.

“I am a very proud grandmother,” Julia said. “I know that her mom was just sitting on her shoulders (during the gala). I know she guides her and is her guardian angel.”

Julia expressed appreciation for the love, encouragement and support that Warren County residents have shown to Stephanie and the Wheeler family throughout her life, career and more recent honor.