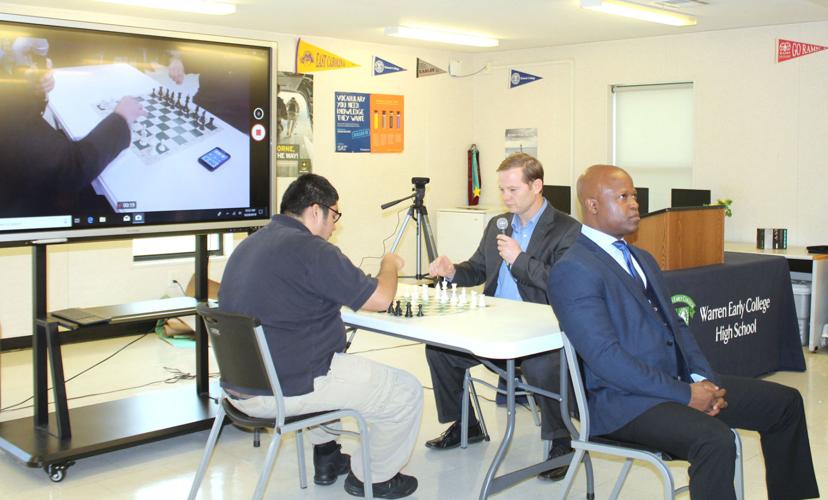 Never let any person or any of life’s circumstances convince you that you can’t achieve your dreams.

That was the message that Maurice Ashley, the first African-American international chess grandmaster, brought to students at Warren Early College High School on Oct. 29.

Ashley, who grew up in Kingston, Jamaica, and Brooklyn, N.Y., made the stop at the local high school as part of a visit to Warren County as the keynote speaker for the 8th Annual Small Business Summit held in Warrenton that evening.

The chess grandmaster told students that, early in life, he was influenced by the determination of his parents to provide a better life for their family. For Ashley’s mother, that meant leaving the family to come to the United States knowing that her children could not make the move until she was well established in steady employment.

After 10 years, the family was reunited and settled in the Brownsville community of Brooklyn, N.Y.  Ashley recalled that in Jamaica, the family saw images of the United States on television of skyscrapers and yards with picket fences. He imagined the family living in a penthouse. However, they had to make do with a two-bedroom apartment.

Once again, Ashley’s mother dreamed of a better life for her children. She wanted each one to earn a college degree and be able to afford a house.

Ashley’s life path took a different direction early on, however. At the age of 14, he discovered chess. Ashley and a friend loved to play the game. After what Ashley described as being crushed in several games by his friend, he tried a different approach. He checked out a book about chess from a library and learned as much as he could, thinking that he would finally defeat his friend. When the two played their next match, Ashley was again crushed.

Ashley told the WECHS students that the experience taught him an important lesson: he would need to work harder to become better at chess. Eventually, he defeated his friend. The duo’s love of the game continued to grow, and they became what Ashley called chess nerds.

From there, he played chess hustlers for small sums of money. Ashley recalled losing money, but he kept studying the game, and his skills improved. He started beating the hustlers and moved on to chess clubs.

As his chess skills improved, Ashley’s rating increased. According to the U.S. Chess Association, ratings range from 100 to nearly 3000 to show an estimate of one’s playing strength based on prior results.

Ashley was excited when he received a certificate of National Master status from the U.S. Chess Association, meaning that he had achieved a rating of 2200. The following year, he reached Senior Master status, a rating over 2200.

Ashley showed both certificates to his mother, who gave him the same response each time: “Where’s the money, then?” She was concerned about whether he could earn a living by pursuing what had become his passion.

At the age of 22, Ashley accepted a job teaching chess after school in Harlem. The job paid $50 per hour.

He later became a chess commentator, and his teaching and commentating work took him overseas to cities including Moscow and London. In 1999, he became the first African-American chess grandmaster. Today, Ashley travels across the United States and the world as a spokesman of how chess builds character and can benefit at-risk youth. In 2016, he was inducted in the U.S. Chess Hall of Fame.

He has worked with a number of celebrities, including Jay-Z,  Beyoncé and Will Smith, and is thankful for the opportunity to interact with them not as actors or musicians, but as people who love to play chess.

Ashley told the WECHS students that his mother has grown to understand his career move and is proud of him.

“I pursued my vision for me, my passion,” he said. “My mother and father didn’t have this vision.”

Ashley told the students that they would likely face career decisions that their friends and family may not understand. However,  they must pursue what is right for them.

“They pay me to talk about chess,” Ashley said. “It’s not about the money. Pursue your passion.”

The grandmaster played an exhibition game against WECHS senior Isaac Gonzalez, a member of the school’s chess club, in a “blind” game.  Ashley sat with his back facing the chessboard while Warren County Economic Development Director Stacy Woodhouse played Ashley’s chess pieces. Woodhouse announced Gonzalez’ moves, and Ashley told Woodhouse what move to make. Both Ashley and Gonzalez reached the point of “check,” meaning that the king is under attack, but were able to move out of it. Soon afterward, Ashley reached “check mate,” meaning that he had won.

When students had a chance to ask questions, they learned that Ashley still loses games. He enjoys playing chess online against anonymous opponents who could be other grandmasters. For him, however,  facing competitors who could defeat him enables him to become a better player.

Ashley advised young people interested in chess to research online for chess lessons, instructional videos and for game opponents. He said that chess can provide valuable life lessons in dedication, making sacrifices and working hard to achieve a goal.

Ashley asked the students to discuss their dreams that some people don’t believe they can achieve.  Students listed going to Harvard University, becoming an oncologist, curing Alzheimer’s disease, becoming an orthopedic surgeon, and going to college and playing football.

“In our family, I am a grandmaster chess player. That was a crazy dream, but now it is reality,” Ashley said.

“They all became something. They know the sacrifices our mother and father made,” Ashley added. “… My mother took the ultimate risk (in coming to the United States), and beauty came  of it.”

He told the students that the key to becoming successful is to believe that they can be.