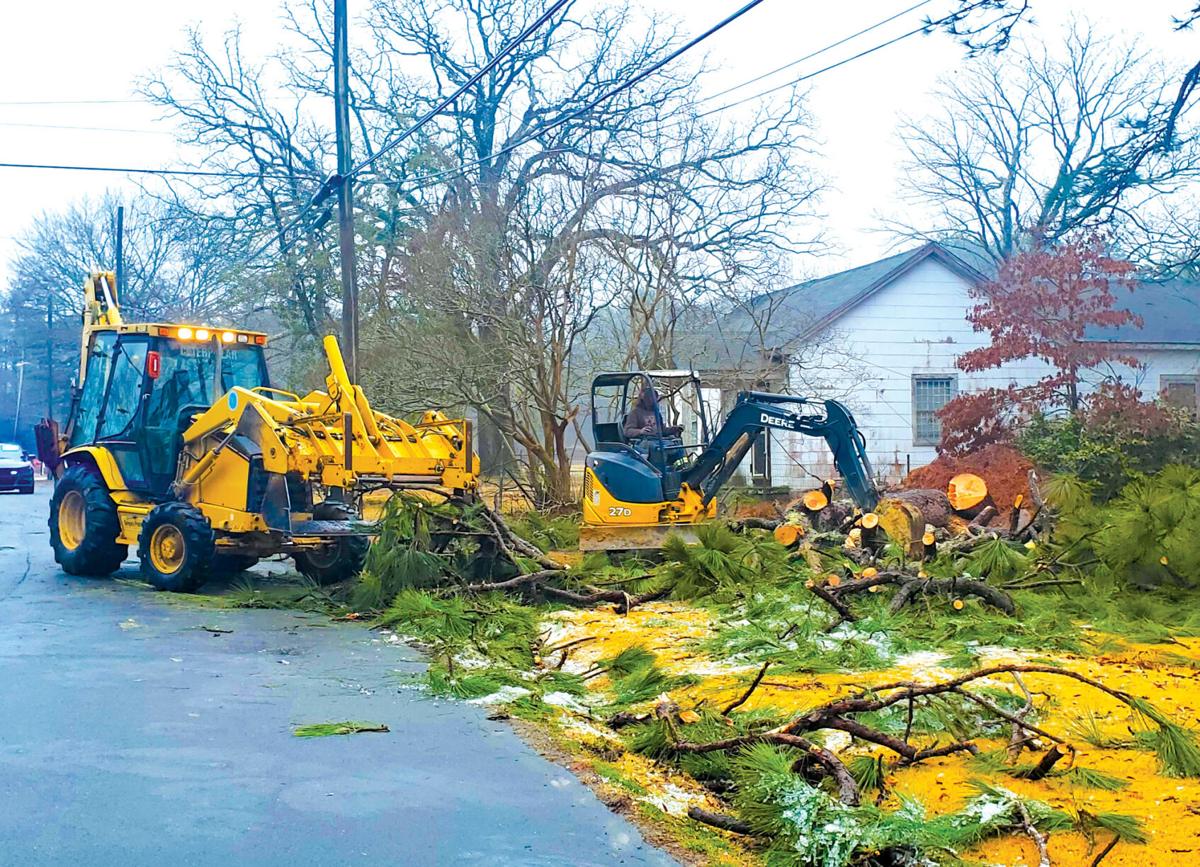 Crews remove debris from a large pine tree that fell near a home on Division Street in Norlina. 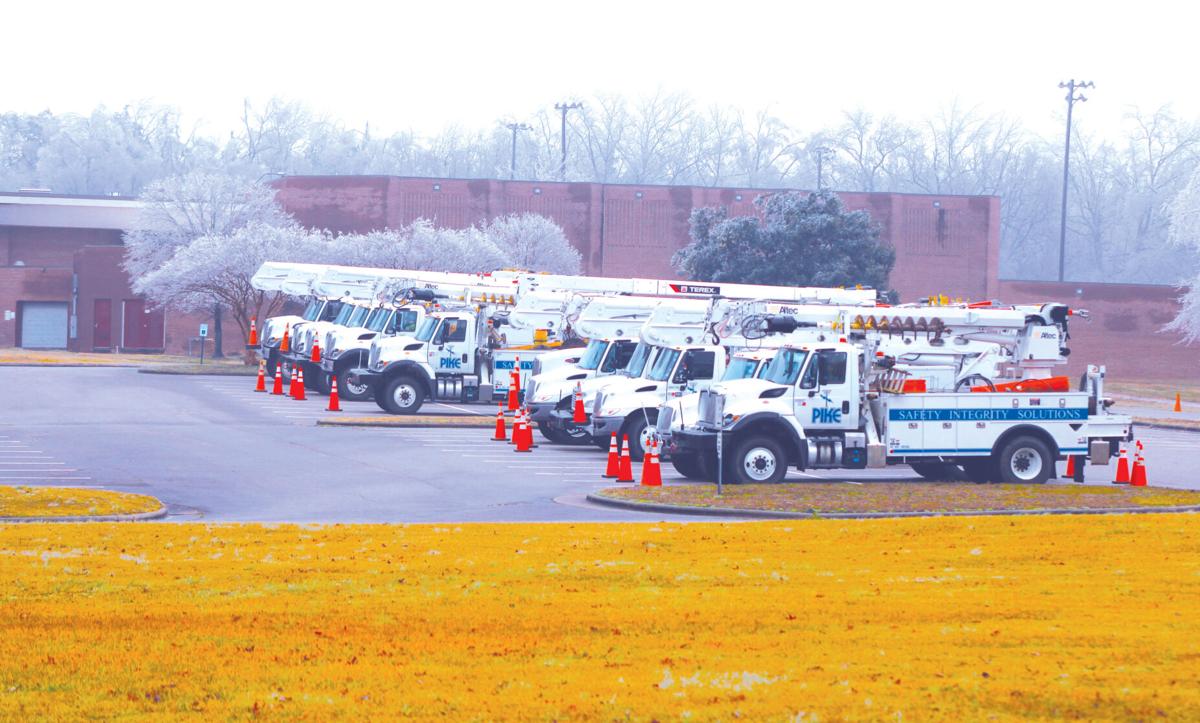 Power company vehcles line up in the Warren County High School parking lot as crews prepare for their next assignments. 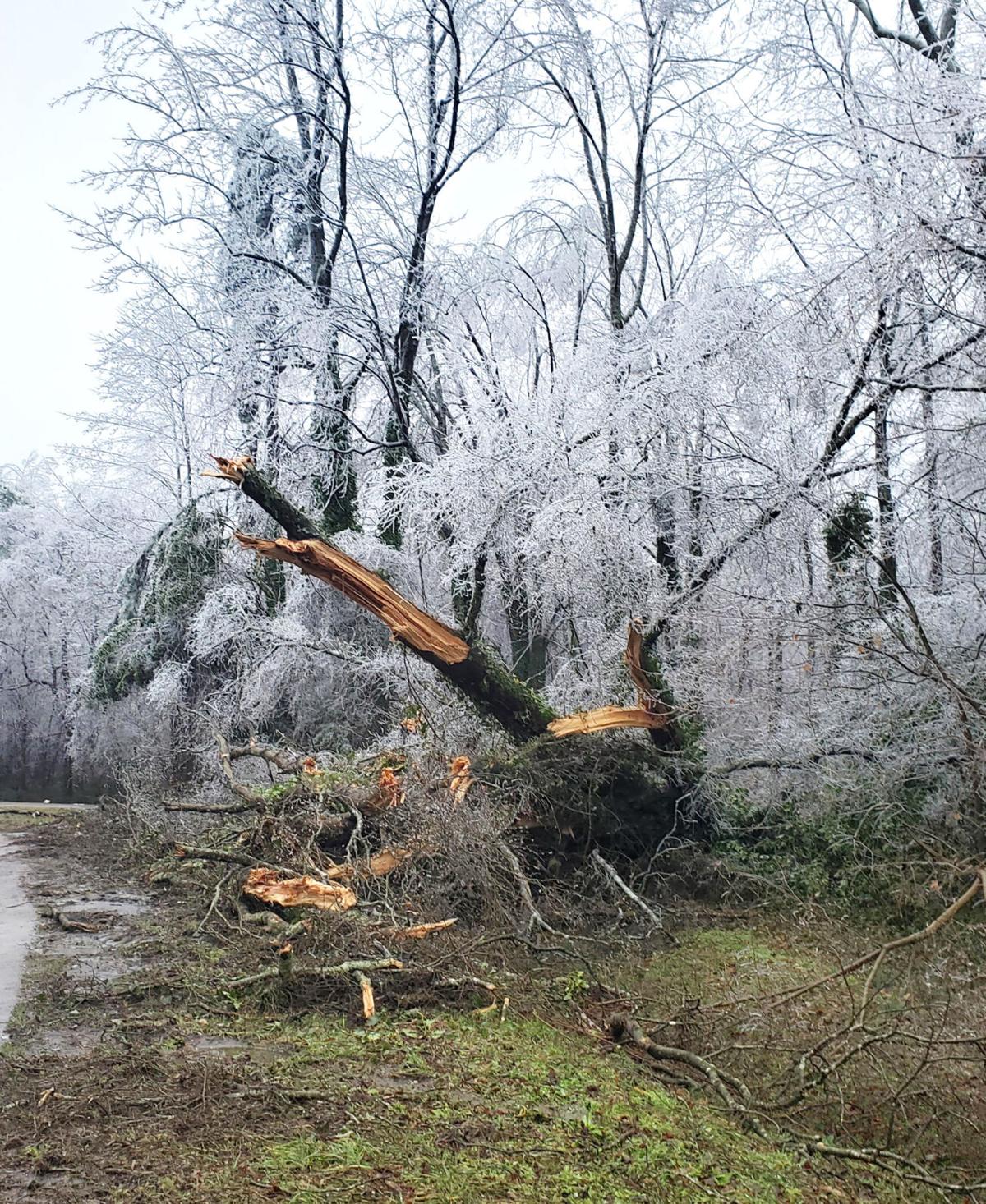 The ice storm resulted in downed trees and limbs on Highway 158 in Norlina. 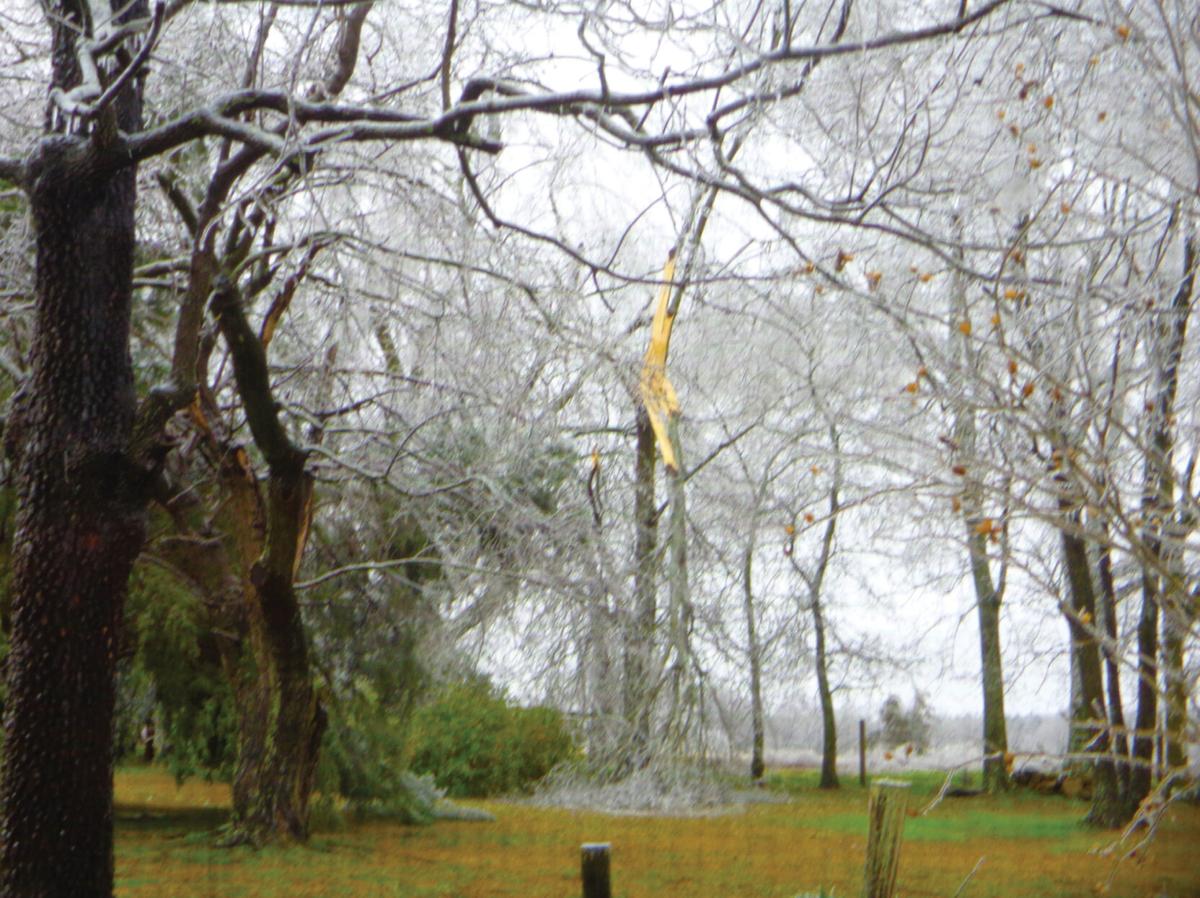 A tree is snapped in the backyard of a home in the Norlina area.

This past weekend was one that Warren County residents will remember for a long time — no matter how much they want to forget it — as an ice storm downed trees and power lines across much of the county.

At the beginning of the week, weather forecasts called for rain over the course of several days and through the weekend. However, by mid-week, the forecast sounded much more serious as two of the most dreaded words for North Carolinians — freezing rain.

Local residents may remember previous ice storms in recent years, particularly in 1996 and the early 2000s, but it had been a while since a majority of the county experienced widespread damage and power outages due to ice. The weekend’s weather forecast sounded like Feb. 12-14 could be remembered among the worst ice storm to strike Warren County.

The forecast sounded even more ominous by late week: a light glaze of freezing rain on Friday, followed by heavier accumulations well into Saturday with extended hours of below freezing temperatures.

Friday came and went. After surviving the daylight hours, local residents braced for what was to come overnight and into Saturday. Those who had escaped without losing electricity might have felt fortunate, but that was not to last.

The overnight period brought the almost nonstop sound of cracking limbs and falling trees as freezing rain accumulated, bending limbs and trees to the point that they could no longer stand the weight. Power lines and related equipment were no match for the falling limbs and trees.

Saturday morning proved to be no better as the rain continued and temperatures struggled to rise above freezing. Power crews battled periods of rain through the rest of the weekend and into Monday and Tuesday as they worked to restore electricity.

The ice storm followed weather predictions that the greatest accumulations of ice in the piedmont region of North Carolina would be in counties that bordered Virginia, and that the freezing rain would be even worse in counties such as Vance, Granville, Person and on westward in the state.

In Warren County, areas to the south closer to Franklin County experienced much lighter ice accumulations than the more northern and northwestern areas. Warren County Emergency Management Coordinator Dennis Paschall said that the heaviest damage in the county seemed to follow a path from the Manson and Drewry areas to the US 1 and Hwy. 158 corridors.

In the areas with greater accumulations of ice, it was a common sight to see large trees and limbs downed in yards in all directions. Some roads resembled the aftermath of a tornado or hurricane.

Warren County 911 Dispatch received more than 70 calls for downed trees and power lines. That meant an exhausting weekend for local N.C. Department of Transportation workers, fire departments, power crews and other personnel who worked to clear roadways and restore electricity.

Damage in the North Carolina counties that border Virginia was so great that Duke Energy Progress brought more than double its usual number of crews to the area. The power company reported that 300 crews from the local area were originally in place in Warren County. They were joined by between 400 and 500 more crews from other areas, including the Triangle, Charlotte and Asheville.

Halifax Electric Membership Corporation, which serves portions of Warren, Halifax and nearby counties, reported more than 3,300 power outages at the height of the ice storm. By early afternoon on Sunday, the number of outages was down to 15.

Warren County utilities were not immune to the effects of the ice storm. For a portion of the weekend, the county issued a notice for its water customers to conserve.

As the people in the community helped one another over the weekend, the Warren County Armory Civic Center opened as a warming center on Sunday for those without electricity.

The county began to return to normal by Sunday and Monday as electricity was restored to harder hit areas. Not far to the west, however, areas of Vance County were still experiencing power outages on Tuesday, according to outage maps on the Duke Energy Progress website.

As Warren County residents start to breathe sighs of relief that they survived what might the worst ice storm in years, Paschall expressed appreciation to all emergency personnel who help to keep county residents safe, especially firefighters, the DOT and power companies.