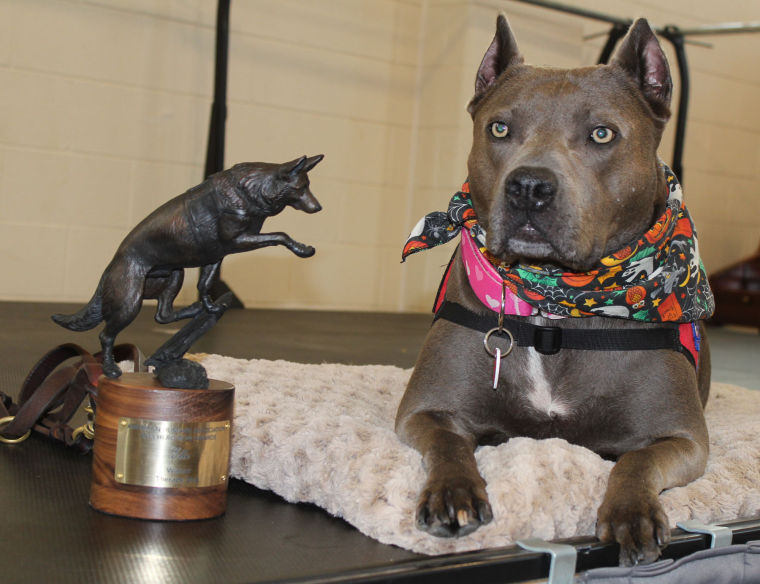 Elle, the newly selected American Hero Dog, poses with the trophy awarded to her by the American Humane Association. 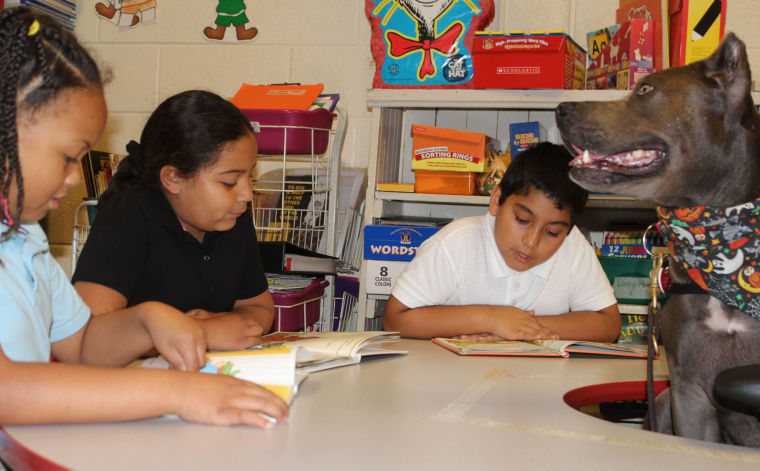 An attentive Elle, the Pit Bull, sits in her favorite chair listening as students, from left to right, Alianna Richardson, Katelyn Richardson and Ismael Espinoza read during her recent visit to Vaughan Elementary School. 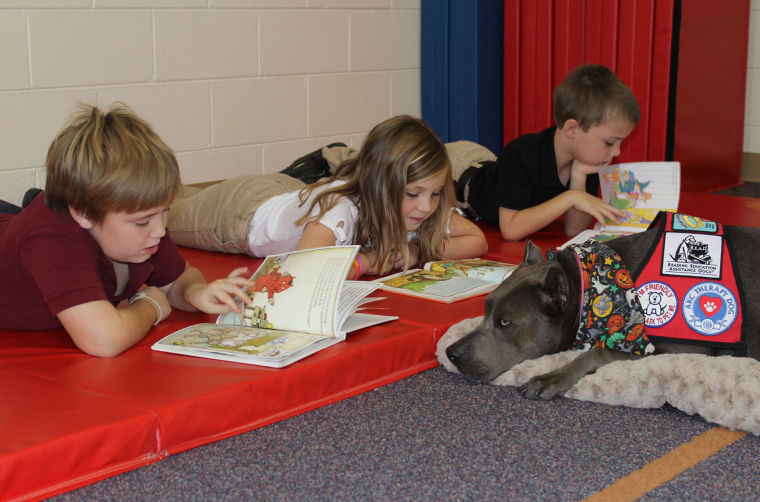 Elle, the newly selected American Hero Dog, poses with the trophy awarded to her by the American Humane Association.

An attentive Elle, the Pit Bull, sits in her favorite chair listening as students, from left to right, Alianna Richardson, Katelyn Richardson and Ismael Espinoza read during her recent visit to Vaughan Elementary School.

Elle (pronounced Ellie), a 5-year-old therapy dog from Roanoke Rapids, was recently in the company of Hollywood celebrities as she was chosen out of 141 dogs from across the country as the 2013 American Hero Dog by the American Humane Association.

Long before she was given the title of American Hero Dog, Elle was already a hero in the eyes of children at Vaughan Elementary School who take part in her reading program, “Tail Waggin’ Tales.”

Now in her third year as part of the Vaughan Elementary family she continues to have an enormous impact on the children she works with as they improve their reading skills, learn about pet safety and proper interaction with dogs, and being responsible pet parents.

Tuesday, Oct.15, Elle and her pet parent Leah Brewer were back from their star-studded trip to Los Angeles to share stories of her adventures with her friends.

The audience, comprised of students from Wanda Askew and Lane Elkin’s third-grade classrooms, enjoyed when Elle and Leah told Elle’s account of flying for the first time, earning her wings and meeting famous actress Betty White. Elle even demonstrated the bow she performed for White. The students were able to hold the special collar Elle received and got a glimpse of the Hero Dog award.

After sharing tales of meeting an array of Hollywood stars and other Hero Dog nominees, it was time to get down to business, as Elle and Leah demonstrated the proper way to approach a dog and his/her pet parent and how to be a responsible pet parent.

Elle then made herself comfortable on her dog mat as a few children gathered around. She listened patiently as they read to her from their books. She also took a favored spot as she sat attentively in her chair and listened to students around a table as they read to her.

This time spent with friends at Vaughan came to an end as Elle gave her famed high-five greeting to the delight and joyous applause of those around her. The students gave her one last pet as they all lined up and said goodbye for the week.

Elle holds a special place in the hearts of students and staff at Vaughan as is evidenced by her tribute picture in yearbooks from year’s past.

The impact of time spent reading with Elle is especially evident to one student, Josiah, and his mother Trina Paynter. Now in third-grade, Josiah began reading with Elle when he was a first-grader who was struggling at school. Elle began visiting the school and reading with students, and Josiah found an eager and appreciative listener in her. The two formed a bond as Elle seemingly understood Josiah’s reluctance and frustration. She encouraged her boy to grow and improve until he no longer dreaded going to school, but,instead looked forward to school and his time with Elle.

Elle is not only helping children, families and people of her community to understand dog safety and good pet ownership, but is also helping to break down a misconception and misunderstanding of Pit Bulls like herself by spreading positive awareness of her canine counterparts. She is setting the example of what this breed is capable of and breaks the mold of what is expected.

To learn more about Elle the 2013 American Hero dog you can find her at facebook.com/ElleThePitBull.

Be sure to tune in to watch as Elle is named this year’s American Hero Dog during the third annual American Humane Association Hero Dog Awards tonight at 8 p.m. on the Hallmark Channel.